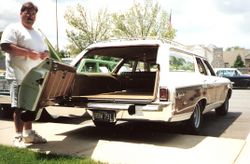 The Chevrolet Kingswood Estate was a station wagon produced by Chevrolet from model years 1969 through 1972. Features which distinguish it from the Kingswood (non-'Estate') are the addition of faux-wood paneling on the sides and tailgate, and a slightly fancier interior. Optional concealed headlamps provided further distinction on a small number of 1969 models. Based on the full-sized rear-wheel drive GM B-body platform, it was available only with a V8 engine. Its sedan equivalent was the Chevrolet Caprice, and starting in 1973 this model would be referred to as the Caprice Estate wagon. It was considered the most deluxe station wagon offered by Chevrolet at the time.

The 1969 and 1970 Kingswood Estate (and other full-size Chevrolet wagons) were equipped with a two-way tailgate that, when open sideways, revealed a cutout in the rear bumper that allowed passengers to step into the bumper as they entered the third seat or loaded the optional roof luggage carrier. In 1971 and 1972, the tailgate setup was changed to a new Glide-Away "clamshell" design in which the window disappeared into the roof and the tailgate below the floor.

This article about a car produced between 1945 and 1975 is a stub. You can help Wikipedia by expanding it.