The Chevrolet Bel Air is an automobile series produced by the Chevrolet division of General Motors from 1953–75. From 1950–52, hardtops in Chevrolet's premium Deluxe model range were designated with the Bel Air name, but it was not a distinct series of its own. The Bel Air continued in production in Canada through the 1981 model year. 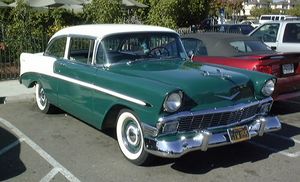 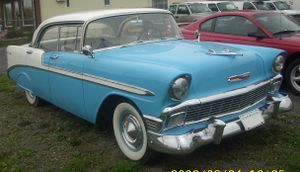 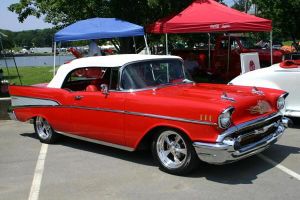 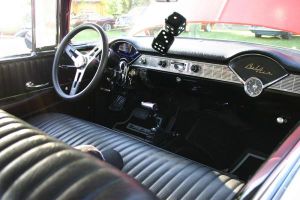 In 1953 Chevrolet renamed its series and the Bel Air name was applied to the premium model range. Two lower series, the 150 and 210, also emerged.

The 1953 Chevrolet was advertised as "Entirely New Through and Through," due to the restyled body panels, front and rear ends. However, essentially these Chevys had the same frame and mechanicals as the 1949-52 cars. The Bel Air series featured a wide chrome strip of molding from the rear fender bulge, to the rear bumper. The inside of this stripe was painted a coordinating color with the outside body color, and "Bel Air" scripts were added inside the strip. Lesser models had no model designation anywhere on the car, only having a Chevy crest on the hood and trunk. Bel Air interiors for 1953 had a massive expanse of chrome across the lower part of the dashboard, along with a de luxe Bel Air steering wheel with full chrome horn ring. Carpeting and full wheel covers rounded out Bel Air standard equipment. For '54, the Bel Air stayed essentially the same, except for a revised grille and taillights. During these years, there were two engine choices, depending on the transmission ordered. Both engines were "Blue Flame" inline six cylinder OHV engines. featuring hydraulic valve lifters and aluminum pistons. The 115 hp (86 kW) engine was standard on stickshift models, with solid lifters and splash plus pressure lubrication. Powerglide cars got a 125 hp (93 kW) version which had hydraulic lifters and full pressure lubrication. '54 cars with stick shift got the 1953 Powerglide engine. During 1953-54, Bel Airs could be ordered in convertible, hardtop coupe, 2- and 4-door sedans, and, for 1954, the Beauville station wagon which featured woodgrain trim around the side windows. Power steering was optional for 1953; 1954 added power brakes, power seat positioner and power front windows.

In 1955, Chevrolets gained a V8 engine option. The new 265 cubic-inch V8 featured a modern, overhead valve high-compression, short stroke design that was so good that it remained in production in various forms, for many decades. The base V8 had a two-barrel carburetor and was rated at 162 horsepower (121 kW), and the "Power Pack" option featured a four-barrel carburetor and other upgrades, yielding 180 brake horsepower (130 kW). Later in the year, a "Super Power Pack" option added high compression and a further 15 brake horsepower (11 kW). Most enthusiasts today associate the Bel Air and the V8 together, even though neither was dependent on the other. That year, Chevrolet's full-size model received new styling that earned it the "Hot One" designation by enthusiasts. Unlike Ford and Plymouth, Chevrolet's styling was considered crisp and clean. Bel Airs came with features found on cars in the lower models ranges plus interior carpet, chrome headliner bands on hardtops, chrome spears on front fenders, chrome window moldings, and full wheel covers. Models were further distinguished by the Bel Air name script in gold lettering.

Engine displacement grew to 283 cubic inches (4,638 cc) in 1957, with the "Super Turbo Fire V8" option producing 283 horsepower (211 kW) with the help of continuous fuel injection. These so-called "fuelie" cars are quite rare, since most Bel Airs were fitted with carburetion.

The '55, '56, and especially '57 Bel Airs are among the most recognizable American cars of all time; well-maintained examples (especially Sport Coupes and convertibles) are highly sought after by enthusiasts. Roomy, fuel-efficient, and with tastefully restrained use of tail fins and chrome, they are seen by many as vastly superior to the oversized and overdecorated full-size models that would roll out of Detroit for the next 20 years. The '55, '56, and '57 Chevrolets are commonly referred to as TriFives.

From 1955–57, production of the two-door Nomad station wagon was assigned to the Bel Air series, although its body and trim were unique to that model. Prior to becoming a regular production model, the Nomad first appeared as a Corvette-based concept vehicle in 1954. Chevrolet has since unveiled two concept cars bearing the Nomad name, most recently in 1999. 1956 saw the introduction of the pillarless four-door model, called Sport Sedan and available in both Bel Air and Two-Ten models.

For 1958, Chevrolet models were redesigned to be broader, longer and heavier than their 1957 predecessors. The new Impala was a special premium model available as a convertible or closecoupled hardtop coupe. Except for the Impalas, Bel Air was the top trim line in 1958. The Bel Air 2-door hardtop used a different body than the Impala, with a more sedan-like shape than the Impala. For the budget conscious, the Biscayne, (formerly the 210) and the Delray (formerly the 150) completed this model year's family-oriented and utility offerings.

Chevrolet's design for the year fared better than its other GM brethren, and lacked the overabundance of chrome found on Pontiacs, Oldsmobiles, Buicks and Cadillacs. Complementing Chevrolet's front design was a broad grille and quad headlights; the tail received a fan-shaped alcove on both side panels, which housed dual tail lights.

The Bel Air also gained a halo model in 1958, the Impala, available only as a hardtop coupe and convertible in its introductory year. Impala styling followed the basic lines of the other Chevrolet models but received special styling cues including a different roof line, a vent above the rear window, unique side trim, and triple tail lights housed in slightly broader alcoves.

Despite being a recession year, consumers made Chevrolet the No. 1 make of automobile (beating Ford, which held the title in 1957) and the Bel Air was at the core of Chevrolet's popularity. With its wide variety of body styles and models, Bel Airs could be optioned with almost every conceivable luxury within the Chevrolet line. The Nomad station wagon name also reappeared in 1958 when the vehicle bowed as the premium four-door Chevrolet station wagon, lacking the unique styling of the 1955-57 Nomads. Most Chevrolet station wagon models had two tail lights housed in abbreviated alcoves, which were made smaller to accommodate the rear gate. 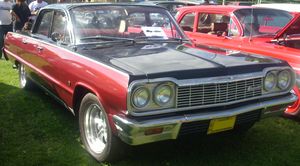 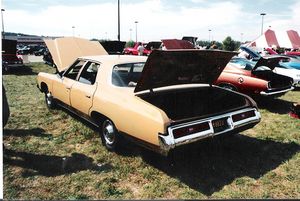 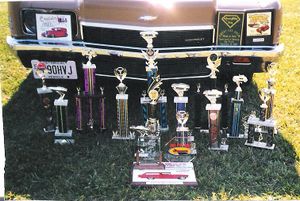 By the late 1960s (with the introduction of the Caprice), the Bel Air and its Biscayne stablemate were primarily marketed to automotive fleet customers. However, the Bel Air remained available to private customers who sought a basic, no-frills full-sized car that was slightly better trimmed than the low-line Biscayne. When the Biscayne was discontinued after 1972, the Bel Air was demoted to the low-level model.

A 250 cubic-inch six-cylinder engine and three-speed manual transmission with column shift remained standard equipment through the 1973 model year on sedans with the 350 V8 and automatic standard on wagons - the Turbo Hydramatic automatic had been the sole transmission choice on V-8-powered Bel Airs since the spring of 1971 though the old two-speed Powerglide was still offered with the six-cylinder engine through the 1972 model year. Only about 1,400 cars were built with the inline six in 1973, and that engine and with manual transmission were shelved by the end of the model year - marking the last full-sized American car to offer a manual gearbox.

All Bel Air sedans built in 1974 and 1975 listed a 350 two-barrel V8 engine and Turbo-Hydramatic transmission as standard, with station wagons getting the 400 four-barrel V8, again with Turbo-Hydramatic standard. The 400 V8 was optional on sedans and the 454 was available on both models.

Most other changes to the Bel Air during its final years were identical to the more expensive Caprice and Impala lines. For instance, the 1975 models had a new roofline and came with new dashboard, radio and climate control graphics (the speedometer read up to 100 mph (160 km/h), and had smaller numbers for kilometers per hour). In addition, customers could buy their 1975 Bel Air with two new options: an Econominder gauge package (which included a gauge that monitored fuel economy, due in part to growing demands for fuel economy) and intermittent wipers.

In 1975, Consumer Reports tested a Bel Air four-door sedan with the 350 V8 and Turbo Hydramatic against other U.S.-built full-sized cars of that period including the Pontiac Catalina, Ford LTD and Plymouth Gran Fury. Consumer Reports concluded in its report that prospective buyers should pay the extra $200 or so to upgrade to the costlier Impala noting advantages such as greater resale value and interior/exterior appointments more comparable to the other tested full-sized vehicles.

The last Bel Airs for the United States were manufactured for 1975. For 1976, a lower-trimmed Impala "S" four-door sedan was a one-year offering which had a bit less standard equipment than regular Impalas and could be considered a partial replacement for the Bel Air.

Chevrolet's Canadian affiliate continued the Bel Air as its lowest-priced full-size car through the 1981 model year, and was Chevrolet's badge engineered version of the Pontiac Laurentian with minimal exterior and interior trim.

Bel Airs received the same downsizing as their Impala/Caprice counterparts in Canada and the U.S. for 1977. Bodystyles offered during this period included four-door sedans, two-door coupes and station wagons. Reflecting the smaller size of these downsized big cars was a lineup of generally smaller engines for improved fuel economy with Chevy's 250 cubic-inch "Turbo-Thrift" six-cylinder reinstated as standard power in sedans for the first time since 1973 with the 140 horsepower (100 kW) 305 Turbo-Fire V8 available as an option in sedans and standard on wagons. The 170 horsepower (130 kW) 350 Turbo-Fire V8, available in both models, was now the top option as the larger 400 Turbo-Fire small block and 454 Turbo-Jet big block V8s were no longer available. Standard equipment on Bel Airs during this period included small hubcaps, cloth-and-vinyl upholstery in sedans or all-vinyl in wagons, cigarette lighter, ashtray, automatic dome light for front doors, full carpeting, Astro Ventilation, Delco Freedom battery, variable-ratio power steering, power front disc brakes and Turbo Hydramatic transmission.

For 1980 the engine lineup was revised with the inline six replaced by a new 3.8-liter or 229 cubic-inch V6 based on the small-block V8 as the base engine in sedans. The new base V8 (standard on wagons, optional on sedans) was a smaller 267 cubic-inch small-block with two-barrel carburetor, while the 305 small-block (optional on all models) got a 15 horsepower (11 kW) increase to 155 horsepower (116 kW) thanks to the change from a two-barrel to four-barrel carburetor. The 350 V8 was now restricted to police-option vehicles. Another new option for 1980-81 was the Oldsmobile-built 350 Diesel V8. 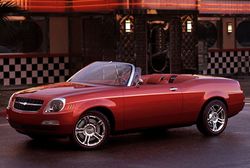 In 2002, a concept Bel Air convertible was shown at the North American International Auto Show. It featured many styling and design cues from the legendary 1955–57 models, and had tail lights very similar to the Ford Thunderbird. So far, General Motors has shown no interest in producing such a car.