Difference between revisions of "Chevrolet Cavalier"

The Chevrolet Cavalier was a compact automobile produced from 1982 to 2005 by General Motors. Built on the company's J platform, the Cavalier was one of the best-selling cars in the United States throughout its life.[1]

The Cavalier replaced the Monza, which was available as a 2-door coupe, a 3-door hatchback and a 3-door wagon (using the same body as the discontinued Vega wagon, the model it replaced). The inexpensive Chevette was retained even as sales declined, and was formally replaced by even smaller captive imports. Both previous platforms had conventional rear-drive layouts while the new design could compete on the same level with more efficient front wheel drive offerings, such as the Dodge Omni and Honda Civic. Ford and Chrysler also introduced new front drive compacts. The largely successful mission of capturing the bulk of domestic compact sales would fall on the Cavalier's 2-door coupe, 4-door sedan and 4-door station wagon, the relatively short-lived 3-door hatchback (which replaced the Monza 2+2 Sport 4-door hatchback) and, in later years, a 2-door convertible. The small Cavalier even helped fill in lagging sales of the compact Citation (a Nova replacement).

The Cavalier first went on sale in early 1981 as a 1982 model with front-wheel-drive, a choice of two four-cylinder pushrod engines, and coupe, sedan, hatchback, and station wagon body styles.

The Cavalier was largely identical to the Pontiac Sunbird. Before the Pontiac brand was officially introduced in Mexico in 1992, Cavaliers sold there featured Sunbird body panels, as opposed to US-spec Cavalier panels. From 1993 on, the sibling marques were both offered, as in the United States.

1988 Cavaliers were redesigned with fresh styling and modified engines. The hatchback disappeared from the line, but the other bodystyles continued. The exterior and interior were freshened in 1991.

The Cavalier was redesigned for 1995 with expanded dimensions and styling that was a departure from the two boxier previous generations. The wagon was discontinued, but the coupe, sedan, and convertible body styles returned.

The Cavalier was replaced by the Chevrolet Cobalt in 2005. 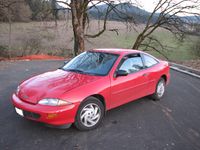 The IIHS gave the 1995-2005 Cavalier a Poor overall score in their frontal offset collision test.[2]

As part of a wider effort to avoid additional restrictions on exports to the US, the third generation model was briefly sold in Japan by Toyota under an agreement with GM, badged as the Toyota Cavalier. Aside from the fact that it was right hand drive, the Toyota Cavalier also featured a leather-wrapped shift knob and steering wheel, wider front fenders, amber turn signals for Japanese regulations, power folding rear mirrors, side turn signal repeater lights on the front fenders, and carpeting on the inside of the trunk lid. Interior seats were often flecked with color, and the rear seat had a fold-down armrest. The Toyota Cavalier was entirely produced by GM in the USA and sold from 1995 - 2000. 1996-2000 Toyota Cavaliers came equipped with the 2.4L LD9 engine, while the 1995 used the 2.3 liter quad 4.

While all Chevrolet-badged Cavaliers received a facelift for 2000, the Toyota did not and used the same basic design for the 2000s as it did for the 1995-1999 models. The only exception to this is the colors available, the interior trim colors and the tail-lights.

A fair number of these vehicles are re-exported as Japanese used cars, most notably to New Zealand. Production of the Toyota Cavalier ceased in June 2000.

TRD made a body kit and rear wing for the Cavalier, available exclusively in Japan.