The Chevrolet Beretta was a front wheel drive coupé produced by the Chevrolet division of General Motors from 1987 through 1996. It was built in Wilmington, Delaware and Linden, New Jersey along with its GM L platform mates, the Chevrolet Corsica and the Canada-only Pontiac Tempest sedan. The Beretta was designed in Chevrolet Exterior Studio 3, the same design studio as the Chevrolet Camaro and Corvette, but the Beretta slotted below the two.

The GTU was a special Beretta model on sale from 1988-89. Each was made by taking a fully loaded Beretta GT (w/ Z51 suspension package) and shipping it to Cars and Concepts. They equipped it with 16x7" aluminum alloy wheels, custom ground effects, rear spoiler, mirrors, custom trim, and decals. With the stiffer suspension equipped on the GTUs, these cars were capable of 0.92 G on the skidpad, well above most cars available. GTUs came in black, white, or red.

The GTZ was the high-performance Beretta, and was produced from 1990-1993. It came standard with Oldsmobile's 2.3 L High Output Quad 4, which produced 180 hp (134 kW) and 160 ft·lbf (217 N·m) of torque. Also standard was a Getrag 5-speed manual transmission and GM's FE7 performance suspension. The car posted a 0-to-60 mph time of 7.6 seconds and one of the fastest slalom speeds of any front wheel drive car tested, even besting the rear wheel drive Chevrolet Camaro. Motor Trend's only complaint was the Quad 4's NVH (noise, vibration and harshness) and noted it was one of the most raucous engines of its time. Beginning in 1991 the 3.1 L V6 could be had as an option on the GTZ, but it was only available with a 3-speed automatic transmission that reduced the 0-to-60 mph time to around 9.0 seconds. The 3.1 L V6 was standard on 1990-1992 GT models and optional for all base models and GTs in 1993. Starting in the 1994 model year the 3.1 L V6 could only be ordered with an automatic transmission.

The 1991 model year saw major interior updates, including a new dashboard/center console and the addition of a driver's side airbag. 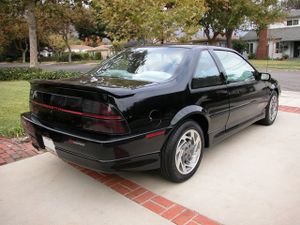 General Motors was sued by Fabbrica d'Armi Pietro Beretta for trademark infringement over the naming of the Beretta. The suit was settled out-of-court in 1989; GM and Berreta exchanged symbolic gifts a Beretta GTU coupe and a pair of Beretta shotguns. GM donated US$500,000 to a Beretta-sponsored charity which was also affiliated with the GM Cancer Research Foundation.

Beretta's sales steadily declined every year of production as the market turned away from two-door models, and in 1996, Chevrolet ended production of both the Beretta and Corsica after 10 model years. While the Corsica would be replaced in 1997 by the Chevrolet Malibu, the Beretta would not be replaced.

The Hornet car from Daytona USA game is based on a Chevrolet Beretta.