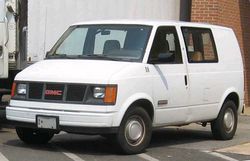 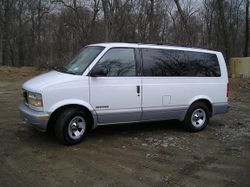 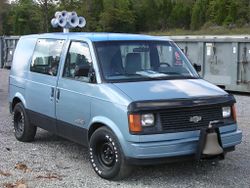 Chevy Astro modified with the addition of an operable Train horn and bell.

The Chevrolet Astro was a rear-wheel drive minivan introduced by Chevrolet in 1985 to rival domestic (American) competitors the Dodge Caravan/Plymouth Voyager twins and the Japanese Toyota Van. Also sharing the Astro's platform was its sibling, the GMC Safari. In addition to standard passenger uses, the vans were also available as cargo vans, and converters used them as the basis for small conversion vans.

The Astro model name had been used previously for the unrelated Chevrolet Astro 1 Concept car, first shown at the New York Auto Show of 1967.[1]

While the Astro was referred to as a minivan, it was sized between the Chevrolet Venture/Lumina APV unibody minivan and the full-size Chevy Van/Express. Similar to the Ford Aerostar, it utilized powertrain components common to GM's other light trucks, yet unlike the trucks the chassis was unibody in structure with a front sub-frame to support the engine and front suspension.

Due to the truck-based powertrain, the Astro and Safari could pull 5,500 lb (2,500 kg) with proper equipment. AWD models could tow up to 5,000 lb (2,300 kg) when properly equipped. This is opposed to front-wheel drive minivans; most of which are limited to a 3,500 pound towing capacity.[citation needed]

Initial advertising boasted that it was a vehicle that will "make you realize that life is too big for a minivan", referring to the Chrysler minivans.

The van seated up to 8 passengers.

In addition to being sold in North America, the Chevrolet Astro was exported to Japan, where the van enjoys a cult following. In 2005, to celebrate the last year of Astro production, Chevrolet of Japan offered a limited edition run of the final production models. The Astro's popularity in Japan comes even though it was only offered in left-hand drive.

Much like the second-generation GM F-body 1970-1981 and X-body vehicles, the GM M-van (Astro/Safari) had a bolt-on subframe incorporating the front suspension from a GM B-body station wagon (Chevrolet Caprice, Cadillac Brougham) with a leaf-spring rear suspension. The lower ball joints were larger than their B-body counterparts (similar to 1977-96 Cadillac D platform vehicles e.g. Fleetwood limousines). These ball joints were later used in the final Chevrolet Caprice 9C1 (police package) cars manufactured in 1995 and 1996. They also shared many mechanical similarities to the GMT 325/330 midsize S/T Pickup/Utilities.

As mentioned above, the Astro and Safari were rear-wheel drive vehicles, but in 1990 a new all-wheel drive (AWD) system, designed and developed by FF Developments (FFD)[2], was made optional. The AWD models had a lower fuel economy: 17 miles per gallon highway versus 20-21 for rear-drive vans. Premature idler arm wear on the AWD front suspension is a common problem.[citation needed]

Hundreds of instances of front torsion bar failure in the AWD suspension were reported to the NHTSA. The torsion bars failed without warning, resulting in bottoming of the suspension. Repair required replacement of both torsion bar assemblies with upgraded designs at a cost of about $1000. No fatalities were reported.[citation needed]

In 1990, a new dash was introduced along with the availability of a long-wheelbase model. In 1995, the model was face lifted with an extended nose that resembled the then-new full-size Express vans. In 1996, a redesigned dash received a passenger side air-bag. The vans remained mostly unchanged until canceled in 2005.

In 2003, GM upgraded the chassis of both the Astro and Safari with certain suspension components, larger brakes, and six-lug, 16 inch wheels from the full-size Chevrolet and GMC half-ton pickup trucks. The modifications improved[citation needed] the poor handling and braking of the vans.

End of the line

The Insurance Institute for Highway Safety (IIHS), which is known for its testing of vehicles and results that are often shown on NBC's Dateline television news program, gave the Astro a "poor" rating in 1996 because of what by all appearances was a horrifying display of structural failure in the Institute's 40 mph (64 km/h) crash test into a fixed, offset barrier. The underbody of the test van buckled, pitching both front seats forward and shoving the crash dummy into the dashboard and steering wheel, leading the Institute to comment that "[t]he collapse of the occupant compartment left little survival space for the driver." See detailed crash test information, including photos illustrating the Astro's structural collapse

In addition to their popularity as conversion vans, the Astro and Safari both have popular followings with "back yard" modifiers. Modifications are both street and off-road. Some vans have the original 4.3L Vortec V6 engine replaced with a small-block V8 engine, such as the Chevrolet 350 engine. This switch is simplified because the 4.3L V6 is based on the GM small-block V8, and most of the factory drivetrain components can be reused.

Because of its truck based design, the Astro also is popular with some off road and camping enthusiasts. The combination of a powerful drivetrain, large cargo and passenger space, all-wheel drive, and optional locking differential for the rear axle facilitate off road modifications. The suspension can be lifted, allowing larger tires and clearance with relatively small changes in exterior appearance.

The Chevrolet Astro has been parodied as the "Moonbeam" in various Grand Theft Auto games.