The Holden Kingswood was a range of full-size cars manufactured by General Motors-Holden's, the Australian subsidiary of General Motors (GM). Replacing the Holden Special in 1968, the Kingswood came in utility, panel van, sedan and station wagon body styles. Model-wise the range comprised of the entry-level Belmont, the Kingswood itself, and the high-specification Premier. Commercial variants were offered in two types: a coupé utility and panel van sold in Belmont, Kingswood and Sandman varieties, and a heavy duty utility; designated 1 Tonne. A two-door Monaro coupé and extended-length Brougham were also offered; although neither were classified within the Kingswood range. The Brougham was replaced in 1971 by the Statesman brand, based on the second generation architecture. Between 1971 and 1973 a limited number of SS sports sedans were also produced.

Kingswood passenger cars ceased production with the demise of the HZ series in 1980, succeeded by the smaller Commodore released two years earlier. However, the Kingswood name survived via one of the utility versions that comprised the WB Holden range manufactured between 1980 to 1984.

The first Kingswood was released within the HK-series of Holdens in 1968. It was an all-new design that was larger and heavier than the previous HR Holden. The HK used the same six-cylinder engines, but introduced the first V8 into the Holden range, the 307 Chevrolet small-block. This engine only remained an option until midway through production of the HT-series in 1969 , when the Fisherman's Bend engine facility began production of Holden's own V8 engine, available as either the 253 or 308. Six months after the release of the HK sedans and wagons saw the introduction of the Monaro, effectively a two-door version of the Kingswood. The HG-series of 1970 was a further refinement of the existing formula, notable for the broad adoption of a new three-speed automatic transmission option called Tri-Matic though the first of these actually found their way into the last of the HT models. The early three-speed transmissions were criticised for their unreliability.

The HQ series of 1971 was a completely new design, introducing larger 173 and 202 cubic inch (2.84 and 3.3 L) six-cylinder engines, with the availability of 253 and 308 cubic inch (4.2 and 5.0 L) V8 engines from the earlier model.[1] HQ was the most radically re-engineered Holden since the introduction of the original model, the 48-215. It featured a perimeter frame and semi-monocoque (unibody) construction, and was the first full-size Holden to have coil spring rear suspension.[2] As a cost saving measure, HQ was only engineered for right-hand drive, hence it was not possible to sell the car in left-hand drive markets. Thus Holden exports declined from 1973’s 41,181 to just 7,440 in 1975.[3] Despite this, HQ was Holden's most popular car selling 485,650 units, a total yet to be surpassed in a Holden. It was however, sold over a longer timeframe than previous models.[1][4]

At the time, Holden's then Managing Director, an American named George Roberts, insisted that the HQ Holdens should "ride like a Cadillac" and that the front suspension be engineered to make the car prone to understeer for "safety reasons".[5] Advertising of the car promoted its "jet-smooth ride" over rough roads.[6] Notwithstanding persistent criticism from many motoring journalists, this policy persisted with the subsequent HJ and HX facelift models. It was arguable whether Australian buyers favoured this engineering philosophy and it was not until the 1977 HZ facelift that radical changes were made to the suspension to improve handling.[7] 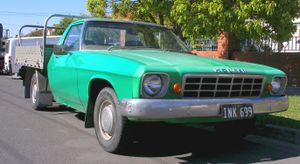 Later in its production life during 1973, Holden released a special edition version of the HQ Kingswood sedan and wagon, named Vacationer. This value package of options proved popular and ended up making return appearances in various Holden cars during the next twenty years or so. Holden, in 1974 introduced the Sandman, a version of the panel van designed to incorporate many of the features of the Monaro, such as sports instrumentation, sports steering wheel and bucket seats, and "rally" road wheels with a choice of two six cylinder and two V8 engines. Other available options included automatic transmission, power steering, and air-conditioning. Sandmans were visually identified by stick-on vinyl decals on the exterior. Although manufactured in conjunction with the utility models, the panel van is externally similar to a station wagon, save for the lack of side windows and side rear doors and seats, and a noticeably higher roofline. It gained notoriety during the latter half of the 1970s as a mobile venue for sexual intercourse. Vans earned nicknames as shaggin' wagons and sinbins.

In 1971 CKD HQ production started in Thailand. HQ's were also CKD manufactured in Indonesia and the Philippines for many years. There was also a program for Mazda in Japan to produce the HQ from CKD kits, which is believed not to have gone beyond the pilot stage. 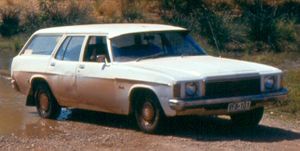 Released in 1974, the HJ series received some major frontal appearance styling changes, taking away some of the "softness" of the HQ cars. Engine displacement was now expressed in metric terms, and the 3.3 litre (202 cu in) six-cylinder engine became the standard power unit for all Kingswood variants and higher luxury levels. Despite this, the 2.84 litre six became the sole engine for the entry-level Belmont. As with the engine, the Belmont also saw the omission of front disc brakes, now a standard fitment on all Kingswood models.

A couple of special-build variants emerged later in production, initially with the Kingswood Deluxe sedan in July 1975 and later the Kingswood Vacationer II sedan and wagon in November 1975.[8] Some HJ series Premier bodies were assembled by Mazda in Japan, which fitted with the company's rotary engine.[9] The car, manufactured between 1975 and 1977 sold as the Mazda Roadpacer was quite heavy and the rotary engine of the time was severely underpowered.[10] To compensate for the lack of performance, Mazda endowed the car with a myriad of electrical gadgets, thus making the performance even worse.[11] 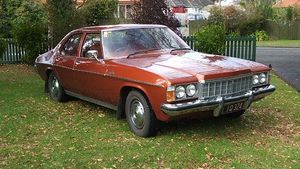 The luxury-oriented model of the HX range, the Premier.

The HX series release of 1976 saw only minor updates to the exterior, notably the grille and badgework. When the HX Kingswood was released, government emissions controls had been tightened and Holden needed to make significant changes to their engines. This resulted in a loss of performance across the range and the deletion of the 2.85 L straight-six. In addition, a Kingswood panel van was introduced to the range of commercial vehicle offerings. The HX Sandman introduced a large 'Sandman' logo on the tailgate and stripes down the sides. During the course of the HX series, front bucket seats were adopted as standard equipment for Kingswood-badged vehicles. As with the previous series, a couple of special-build HX Kingswood variants emerged later in production, initially with the Kingswood 50th Anniversary sedan in November 1976 and also a repeat appearance of the Kingswood Deluxe sedan. 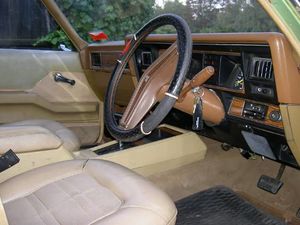 The leather upholstered interior of the HZ Premier.

The 1977 HZ series received minor updates to the exterior, and saw the introduction of what Holden termed "Radial Tuned Suspension" (RTS) on all models. RTS made significant changes to the suspension of the car, greatly improving the handling finesse, while at the same time not compromising ride quality.[12] Modern Motor magazine described the HZ as "a great handler spoiled by the car" in a comparison against the BMW 528i, contrasted as "a great car spoiled by the handling".[13] In this series, the lower-end Belmont was absorbed into the Kingswood range which became two models rather than one: a base model and the slightly more upmarket Kingswood SL. Commercial vehicles—the ute and panel van—were not affected the rationalisation, and Belmont commercial vehicles continued. During the course of the HZ series, equipment levels were upgraded in 1978 effectively to match improvements in the opposition Ford Falcon range, but the life of the Kingswood looked set to end following Holden's release of the VB Commodore range of sedans and wagons in November 1978. After 1980, Kingswood passenger cars were cancelled—replaced by the downsized Commodore.

The final HZ Sandman, featured a choice of V8 engines only, along with a four-headlight grille and under bumper front spoiler. According to a GMH Price List dated 25 January 1979, a basic HZ Holden panel van was priced at AU$6,076, with the Sandman option package an additional AU$1,700. The further optional components also included 5.0 litre V8 engine and a limited slip differential. If a buyer selected every Sandman extra, the price would be more than 150% of the cost of the basic HZ model. By the end of 1979, the Sandman had largely lost its place in the contemporary Australian youth culture - order figures were down and many of the vehicles were now being sold with the stripes and tailgate logos deleted. The Sandman ute was phased out of production prior to the van, the last of which was manufactured in October 1979.

The last Holden to wear the Kingswood badge was one of the variants of the WB-series utility released in 1980. Although the WA and WB projects at Holden were meant to have resulted in all-new full-size cars, the 1973 fuel crisis and cost-cutting meant the scope of changes became more limited each time. Eventually, the WB project was condensed into a major upgrade of the luxury Statesman twins and a facelift of the HZ-series commercial models with new front headlights, tail lights, grilles and the updated Holden "Blue" 6 cylinder engine (4.2 L V8 optional). The Sandman was now marketed as either a Holden van or ute, but the 5.0 litre V8 engine was no longer offered as an available performance option. There were no passenger car versions of the Kingswood, their place in the Holden range having been absorbed by the Commodore. Production of the entire WB-series finished in 1984 when Holden announced they were vacating local production of large luxury and commercial vehicles—due to economics—to concentrate on their medium car range, ie Camira and Commodore, and imported Isuzu commercial product.

Early Holdens were manufactured in New Zealand at the General Motors New Zealand plant in Petone until 1967, and Kingswoods were later assembled from complete knock down (CKD) kits at the new car plant at Trentham Upper Hutt further up the Hutt Valley from Wellington. Other Holden models like Monaro were imported Completely Built Up (CBU) from Australia. From the 1960s Australian-made models were exported to South East Asia, and also to the Caribbean - the Kingswood was assembled in Trinidad and Tobago.

Until the late 1960s, the Kingswood and Premier were sold in South Africa as Holdens, before the demise of Canadian-sourced Chevrolet Impala and Chevelle, which led to the introduction of the Kommando and Constantia, which were based on the HG, then HQ, Kingswoods and used Chevrolet engines, notably the 250 CID 6-cylinder and 308 CID V8.

The Constantia name was in reference to the grand wine estate in the Cape "Groot Constantia", with its world famous gabled Cape-Dutch homestead featuring as the model's emblem, while Kommando referred to the commando squads employed by the Boer forces during the Anglo-Boer War, or South African War.

In the early 1970s, the Holden Monaro was available locally as a Chevrolet SS, while the El Camino and El Torro bakkies (pickup trucks) were based on the Holden Kingswood Ute.

Some of these HQ-series models - assembled in Australia - were sold in New Zealand as the 'Chevrolet 350' from 1971 to 1974. They differed little from the locally-assembled 308CID V8 Holden Statesman apart from a new grille with Chevy 'bow tie', badges and hub caps, and effectively replaced the Canadian-sourced Chevy Impalas last sold in 1969.

In South Africa in the mid-seventies, updated models were introduced, again as a Kommando - with 250 CID straight 6, Constantia, with 250 CID and 308 V8 and the Caprice Classic, with 308 CID V8. In 1979 the Holden-sourced models were replaced by Chevrolet-badged versions of the Opel Rekord, Commodore (similar to the Holden VB Commodore and Senator.

It would not be until 2001 that a Holden-sourced Chevrolet, the Lumina, was sold in South Africa.