The Daewoo Kalos is a subcompact automobile manufactured by GM Daewoo (the South Korean subsidiary of General Motors) introduced in 2002 and marketed globally in 120 countries — prominently as the Chevrolet Aveo[1] (ah-VAY-o).[2]

Marketed worldwide under five GM brands and eleven different nameplates, the Kalos vehicles have evolved through two re-stylings in the car's first generation and have featured three body styles and five engine configurations — all built on a dedicated platform shared with no other vehicles. The two styling iterations are called T200 and T250 — deriving from the internal coding used by first Daewoo and then GM Daewoo during the car's development.

The nameplate "Kalos" derives from the Greek word kalos (καλός) for "beautiful".[3]

The original Daewoo Kalos was introduced in 2002, based on a then-new Daewoo platform named T200, replacing the Daewoo Lanos (T100). Under development before Daewoo's bankruptcy, the Kalos was the company's first new model introduction following its subsequent takeover by General Motors.[4] Manufacture of the Kalos began in early March, 2002 [4], with pre-production prototypes shown at the Geneva Auto Show in April 2002.

Originally designed by Italdesign Giugiaro, the Kalos derives directly from the Kalos Dream concept vehicle first presented at the 2000 Paris Motor Show and subsequent developmental concepts at the 2001 Frankfurt Motor Show, 2002 Geneva Auto Show, and 2003 at the Geneva Show. (Kalos Dream photos) During this three-year development period Daewoo was struggling financially, with the ultimate fate of the company and the concept vehicle remaining uncertain.

Upon introduction the initial European models carried an emblem reading "Design Giugiaro." Referring to his firm's design of the Kalos, Giorgetto Giugiaro said:

The T200 sedans and hatchbacks featured a swage line running along the lower body to the rear door, which kinks downward prominently on the hatchback. 5-door hatchbacks also feature a side window in the C/D pillar with a distinctively angled lower edge. Interiors feature a circular motif throughout. North American Chevrolet Aveo, Canadian Pontiac Wave and Suzuki Swift+ and Australian Holden Barina variants featured the same grille with slight differences; European versions and some Latin American versions featured a wider grille with larger slanted headlights.

According to an April, 2003 GMDAT press release, Daewoo built 119 prototypes during the Kalos's design and development, crashing 31 for research and data-gathering purposes,[6] and manufacturing 39 pilot production vehicles to verify standards and quality.[6]

The body's sheet metal panel gaps were kept to 3 mm (0.1 in) and all but the roof panel were galvanized steel. 46% of the Kalos' underlying structural components were produced with high-strength steel, with tailor-welded blanks used in the production of the vehicle to put strength where needed while saving weight.

The front suspension used MacPherson struts with offset coil springs and a stabilizer bar, while the rear featured a semi-independent torsion beam axle.

The Kalos was sold in three available body styles: a 4-door sedan and 5-door hatchback from the beginning of production in 2002, and a 3-door hatchback available in certain European markets beginning in 2005. All body styles meet North American subcompact and European supermini or B-segment size classifications.

All Kalos iterations featured high H-point seating within a relatively narrow, short and high-roofed body that combined a long wheelbase with short front (81 cm/32 in) and rear (49 cm/19 in, hatchback) overhangs to maximize the outward visibility, interior space and maneuverability relative to the vehicle's footprint. Rear seat H-points are higher in all body types, giving the car theatre seating.

The interior volume was 102.7 L (3.63 cu ft) (5-door) and 107.4 L (3.79 cu ft) (sedan) according to the EPA, meeting the minimum criterion for a compact vehicle despite being marketed as a sub-compact. Headroom was unmatched in its class at the time of its introduction.[5]

The Kalos models have been tested in at least four international New Car Assessment Programs, the results reflecting varying equipment and the differences in the tests themselves. Based on market priorities and price point control, some safety equipment is either unavailable or available only as extra-cost options (including side airbags, ABS, foglights and a rear center position three-point seatbelts and headrests.)

Australia: Holden Barina models received scored 2 stars (of 5) from Australasian New Car Assessment Program (ANCAP), a rating that is lower than the previous European-built, Opel-based Barina had scored,[6] and the lowest ANCAP rating since 2004.[6] Notably, the Australian Barina models do not feature the front-seat mounted side airbags offered in other markets (e.g., USA), nor are the ANCAP ratings directly comparable to the ratings of other NCAP programs.

GM introduced a revised sedan at Auto Shanghai 2005, designed in cooperation with PATAC. Bearing the internal code T250 and sold in South Korea as Daewoo Gentra, the revision comprised primarily interior and exterior styling changes, a new interior IP (instrument panel) and minor equipment changes, including increased sound deadening.[10] Incorporation of the radio antenna into the rear glass and extensive wind tunnel testing helped reduce the coefficient of drag from 0.348 to 0.326.[10]

A restyled hatchback with the sedan's updated IP (instrument panel) was presented as the Chevrolet Aveo during the Frankfurt Motor Show 2007, to be marketed in Europe and North America. The Korean market received its own distinct restyle of the hatchback, the Gentra X.

Later iterations, including the Kalos, Aveo, Barina and Gentra sedans, the Gentra X hatchback and the 2007 "Frankfurt Show" hatchbacks were styled in-house and with the assistance of PATAC -- and depart notably from the original Giugiaro exterior and interior styling designs.

The T250 model has been tested by the European New Car Assessment Program (Euro NCAP)[16]:

Edmunds reported the next-generation Aveo is due in mid-to-late 2010 as 2011 model. The car would use the Gamma 2 global subcompact platform, which would also power next-generation Opel Corsa and Chevrolet Beat.[17] It is believed[who?] that the new model is the same as the Viva project, a premium subcompact car to be released in 2009 for the South American markets and face models such as the Citroën C3, Fiat Punto, Honda City and Toyota Yaris.[18]

The T200 was sold as Daewoo Kalos; the hatchback named 'Kalos V' and the sedan 'Kalos S.' Daewoo began selling the T250 sedan in September 2005 as the Daewoo Gentra, replacing Kalos S. "Gentra" is derived from the English word "gentleman" and "transport(ation)".The tagline in the advertising campaign introducing the Gentra in Korea was "Are you gentle?", and the campaign starred Daniel Henny. In October 2007, the Kalos hatchback adopted the T250 underpinnings and was renamed Gentra X. 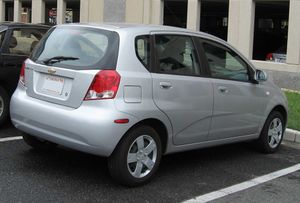 The T200 models were introduced to the US and Canada 2004 models at the 2003 (February) Chicago Auto Show as the Chevrolet Aveo. The US 5-door and 4-door models went on sale in November 2003,[21] and as reported by the Boston Globe in November 2006, "the Aveo (was) the largest-selling subcompact in the United States".[22]

The T250 sedan debuted in January 2006 as the 2007 Chevrolet Aveo at the Greater Los Angeles Auto Show. Sales commenced in North America in August 2006.

The Aveo 5-door hatchback has been marketed as the "Aveo5" in Canada since its inception and in the US beginning with model year 2007. The models are sold as Pontiac Wave (4-door and 5-door, since the 2005 model year) and Suzuki Swift+ (5-door) in Canada. The T200 Wave sedan was replaced for the 2007 model year with the T250, coinciding with the release of the 2007 T250 Aveo. For the 2009 model year, Pontiac Wave was renamed to Pontiac G3 Wave in Canada. In the United States, Pontiac will sell the 5-door hatchback as the Pontiac G3 starting in the spring of 2009.[23]

-fuel economy numbers are based on Canadian Energuide ratings

In February 2004 GM issued a "stop delivery" order, to investigate five accidents that occurred in a tight time frame just as the Aveo was introduced to the US market. The order was lifted shortly thereafter, after an investigation revealed no connection among the accidents.[24]

The Aveo was introduced for its market debut in a 60 second television advertisement[1] that first appeared on New Year's Eve 2003, created by the firm of Campbell-Ewald, directed by Michael Bay [25] and featuring the song Magic Carpet Ride by Steppenwolf. The advertisement was titled "An American Revolution, Car Carrier" and featured six yet to be introduced cars and trucks boarding a car carrier as it traversed the United States. It featured the Aveo descending the Twin Peaks of San Francisco and making an airborne leap highly reminiscent of Steve McQueen's Ford Mustang in the movie Bullitt, before boarding the car carrier.

Two other fifteen second TV ads also created by the firm of Campbell-Ewald [25], spotlighted the Aveo: "Pachyderm" showing an elephant, chased down a city street by an Aveo and "Big Little," in which four basketball players who enter the car appear tiny in big seats, highlighting the vehicle's interior volume.

In Mexico, the T200 is not sold, but the T250 sedan is sold as Pontiac G3 and Chevrolet Aveo. The Automotive News reported in October 2007 that GM would begin producing the Aveo model at the new San Luis Potosí Assembly plant in Mexico (400 km/250 mi northwest of México City) when the plant is complete in June 2009.[26] Production of the Aveo commenced in August 2008.[27]

The T200 was sold as Chevrolet Aveo from its introduction in 2003. The T250 has replaced the T200 sedan in 2006, retaining the same name. Versions sold in this region had 1.4 L engines, and were available as both five-door hatchback and four-door sedan.

It was announced in November 2007 that FSO in Warsaw, Poland, would begin assembling the Aveo under a joint venture between GM and FSO's owner, the Ukrainian company UkrAVTO. GM plans to produce 70,000 Aveos at FSO during 2008, with production rising to 100,000 in 2009. [28] 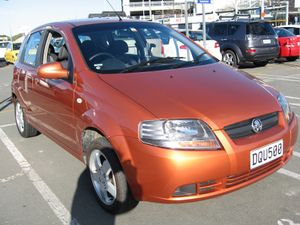 The T200 model was available as the Daewoo Kalos before Daewoo's Australian operations ceased at the end of 2004 and was absent from the Australian market until re-introduced in December 2005 as the TK Holden Barina (3-door and 5-door). The TK Barina replaced the previous XC Barina, which was an imported and rebadged European Opel Corsa. The T250 sedan was introduced in February 2006, and both the T200 and T250 models are sold together as the Barina lineup. The switch from the Opel-sourced Corsa was criticized, given the Kalos' lower ANCAP safety performance. The T250 hatchback, both 3-door and 5-door, was introduced in August 2008.

Indonesia: The T200 is sold as Chevrolet Aveo in Indonesia, Malaysia and the Philippines, as well as South Africa and China (5-door and 4-door).

China The T250 sedan is sold as Chevrolet Lova in China.

India The T250 was launched in India in 2006 as Chevrolet Aveo along with the slogan "An Indian Revolution", referencing Chevrolet's An American Revolution ad campaign. The T200 hatchback has been sold in India since December 2006 as the Chevrolet Aveo U-VA. A taxi called Chevytaxi is based on the T200 sedan.