The ZR1 is a high performance version of the Chevrolet Corvette. More powerful than the Z06 model, it is now the most powerful Corvette currently in production. The ZR1 has been a model of previous generation Corvettes. C3 from 1970-1972 and C4 Corvettes from 1990-1995 both had a ZR-1 model. The older C3 and C4 model ZR-1 had different lettering than the newer C6 ZR1 model.

The ZR1 engine is a modified LS3, designated the LS9, producing 638 hp (476 kW) and 604 ft·lbf (819 N·m). of torque, making this the most powerful production Corvette to date. The LS9 has a sixth-generation Eaton TVS R2300 roots 4-lobe supercharger with an intercooler. The supercharger's four-lobe design offers improved efficiency over three-lobe models. To avoid changes to the hood appearance, the supercharger's output was split into two halves. Each cylinder bank has an intercooler. The intercoolers are from Behr, utilizing an air-to-water, dual-brick design.

The LS3 engine block will be used because the cylinder walls of the LS3 are thicker than the Z06's LS7 since the LS3 uses smaller pistons. Oil injectors, for improved cooling and noise reduction, will be used for the first time in a production Corvette. Connecting rods and the inlet valve will be made of titanium. Heads will be from a special heat resistant aluminum alloy from the LS9's manufacturing process. The camshaft lift was reduced from the LS7's to improve idle quality. With the addition of the supercharger to the 6.2 liter LS9, the higher lift camshaft was no longer necessary to achieve horsepower targets.

Lubrication will be provided by an improved version of the LS7's dry sump system.

The ZR1 flywheel has been improved over the 2008 Z06. The flywheel was upgraded by going from six to a nine bolt design.

Production vehicles are assembled in Bowling Green, Kentucky. The ZR1 engines are built at the General Motor Performance Build Center in Wixom, Michigan.

The name of the ride control system is Magnetic Selective Ride Control (MSRC). MSRC is provided by Delphi. The system uses two modes of control: Tour and Sport. 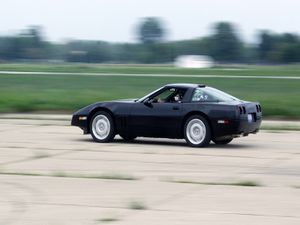 The rear wheels are the largest ever mounted on a production Corvette with 335/25 Michelin Pilot Sport PS2 tires on ultra-light 20 in (510 mm) rims.

The 260 mm (10 in) ZF-Sachs twin-plate clutch supplants Z06's 290 mm (11 in) single-plate unit to reduce inertia for better shift feel. The lower clamping force reduces clutch-pedal effort. The clutch upgrade is considered a dramatic improvement over the unit employed within the Z06.

The front brake rotors are the same carbon ceramic design as those employed in the Ferrari FXX track car, the difference being a diameter reduction from 15.75 in (400 mm) inches to 15.5 in (390 mm) inches for added wheel clearance. The front calipers are Brembo 6 piston.

Both front and rear pads have twice the contact area of the Z06's, as well as the addition of brake pad wear sensors. The Brake master cylinder, booster, ABS pump and system controller are now sourced from Bosch in place of Delphi. 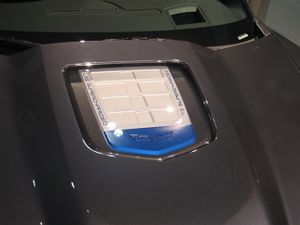 The ZR1 features blue badges, engine valve covers, and brake calipers. The hood contains a polycarbonate window which will allow the intercooler to be viewable. Doors and rear body are from the 2008 Z06. A larger than stock spoiler will span the top rear bumper. Functional fender vents provide engine cooling. The lettering "LS9 Supercharged" can be viewed on top of the supercharger through the hood window.