The Chevrolet Lacetti is a compact car made by the South Korean automaker GM Daewoo since 2002. The first generation Lacetti was available as a four-door sedan, a five-door hatchback or a five-door station wagon. The sedan and wagon were designed by Pininfarina, and the hatchback by Giorgetto Giugiaro. The hatchback, known as Lacetti-5 in South Korea, was introduced in summer 2003. A facelift version was released in 2005.

In 2008 the second generation Lacetti launched, being a badge engineered version of the Chevrolet Cruze.

In Australia and New Zealand, the Daewoo Lacetti was briefly sold between 2003 and 2004 as a four-door sedan. During the 'Asian Economic Crisis', Daewoo became technically insolvent and the company withdrew from the Australian market. 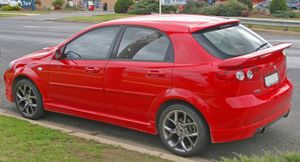 From 2005, the Lacetti (sedan and wagon) and Lacetti 5 were sold together as the Holden Viva. It was introduced at around the same time as the Daewoo Kalos-based Holden Barina. Unlike the current Barina, however, the Viva is meant to be below the premium Holden Astra as a budget alternative.

The Lacetti was available in Canada as the Chevrolet Optra in two models, a four door hatchback (the Optra5), and an Optra Wagon, all in LS or LT trim levels. The sedan was available in 2004 and 2005, but was removed in 2006. All are powered by the 2.0 L inline-4 engine, rated at 119 hp (89 kW) at 5400 rpmand 126 ft·lbf (171 N·m) of torque at 4000 rpm, driving the front wheels through either a 5-speed manual transmission or a 4-speed automatic. Despite its compact size and the 2.0L engine. Fuel economy was poor rated at 10.7L/ 100 km for city and 7.4 for highway driving which was worse than larger cars like the Camry or Accord. The car was positioned as a versatile and fun to drive but affordable budget compact family car. Brakes are disc, front and rear. The Optra slotted between the Cobalt and the Aveo, and it replaced the Daewoo Nubira. 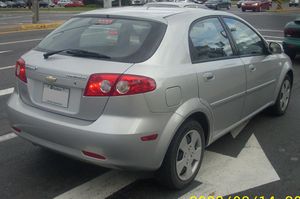 The Optra5 hatchback was added to the lineup in 2005 and was more contemporary in styling and equipment, with projector type headlights and fog lamps, clear taillight lenses, blackout grille, and minimal front and rear overhang with length only 169 in (4295 mm) on the same wheelbase, height, and width. Weight is 2765 lb (1254 kg). In addition to the same options available on the sedan LS and LT models, an options package containing alloy wheels, sunroof, spoiler, leather steering wheel and shift knob, and steering wheel mounted controls for the 8 speaker audio system was in keeping with the younger enthusiast market.

The Optra Wagon was also added to the lineup in 2005 but shares styling with the sedan. While wheelbase and width are also shared with the sedan, the wagon is taller at 59.1 in (1500 mm) and slightly longer at 179.7 in (4565 mm), and heavier at 2855 lb (1295 kg). The wagon has standard alloy roof rails, 60/40 folding rear seat, and a 12 volt power outlet in the rear compartment, in addition to the same options available on the sedan LS and LT models.

On November 1, 2007, General Motors Canada announced that it was discontinuing the importation of Optra for 2008.

In China, the cars are marketed as the Buick Excelle sedan and HRV (hatchback). The sedan, which is also assembled in China, features an updated exterior.

In Europe, the car was initially sold as Daewoo Lacetti, but by the end of the 2004 it was rebadged as a Chevrolet. As with its home market, in some European markets, the Lacetti name is also used for the entire range of sedan, station wagon and hatchback models on the same J-series platform. In Finland and Germany, for example, only the hatchback is sold under the Lacetti name. 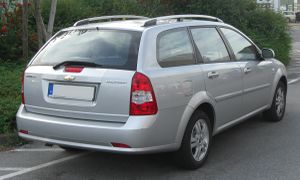 The European models are available with the following three gasoline-powered 4-cylinder engines:

In Europe the sedan version was also sold as Daewoo Nubira, but late in 2003 it was announced that Daewoo would be rebranded as a Chevrolet on the European markets and sales of the Chevrolet Nubira began early in 2004, initially only in Eastern Europe. Following the rebranding of Daewoo products as a Chevrolets across Europe, Nubiras were renamed Chevrolet Lacetti on some markets, thereby expanding the Lacetti lineup to include not only a 5-door hatchback, but also sedan and station wagon models, in line with Korea.

The engines built for the Nubira and its badge engineered twins are the same as in Lacetti hatchback and its badge engineered versions. The 1.8L four cylinder is sourced from the Australian car maker, Holden and is identical to the engine used in the 2004 Astra. It is commonly known as the "Family 2 unit". All of them are gasoline-powered 4-cylinder engines.

The Lacetti is manufactured in India and sold as the Optra and the hatchback version is sold as the Chevrolet Optra SRV (formerly known/sold as Chevrolet SRV), which they plan to get out with a 2L diesel engine in the near future.

In Japan, Suzuki briefly distributed the Lacetti as the Chevrolet Optra station wagon. It was available in two trim levels, the LS and the LT. Both came with either a 5-speed manual or 4-speed automatic transmission with a console shift. The Optra Wagon was powered by a 1.6 L or 1.8 L engine.

In Mexico, the Lacetti came to the market in 2006 as Optra to replace the Chevrolet Cavalier, and it is sold only as a sedan.

In Colombia, the sedan came in 2004 as Optra to replace the Chevrolet Esteem, and hatchback versions of the Lacetti came in 2006 to be assembled as Chevrolet Optra, in 2008 the new Optra is called Optra Advanced. 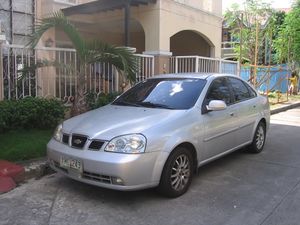 In Singapore, Chevrolet replaced the Daewoo nameplate after GM bought Daewoo. It still offers the same line-up from Daewoo, namely the Optra sedan, Optra station wagon and Optra5 hatchback in Malaysia, Thailand, the Philippines, and Indonesia. The vehicles use the 1.6 L or 1.8 L engine with an automatic transmission available for selected models.

Suzuki marketed a rebadged Lacetti as the Forenza and Reno beginning in the United States in 2004 — following the end of Daewoo's North American operations in 2002 and replacing the Daewoo Nubira station wagon and sedan. The Forenza/Reno falls between the Aerio (later SX4) and the now-discontinued Verona. In the territories of Guam and Northern Mariana Islands, it is sold as a Chevrolet Optra, but it is only available as a sedan.

The second generation Lacetti, built on the GM Delta II platform is a badge engineered version of the Chevrolet Cruze.