This is the article about the Lumina sedan and coupe. For the Lumina minivan, see Chevrolet Lumina APV.

The Chevrolet Lumina sedan and minivan were first introduced in 1989 for the 1990 model year as a new range of vehicles from the Chevrolet brand of General Motors to replace both the Chevrolet Celebrity sedan and coupe, and the Monte Carlo coupe. All Luminas were built at the Oshawa Car Assembly plant, in Ontario, Canada.

Consumers were ultimately confused by having two different vehicles (the Lumina sedan and the Lumina APV minivan) share the same name, and the concept was eventually dropped when the Lumina APV was replaced by the Chevrolet Venture in 1997.

The North American Chevrolet Lumina was based on the mid-size GM W platform, which was shared with the Pontiac Grand Prix, Oldsmobile Cutlass Supreme, Oldsmobile Intrigue, Buick Regal and Buick Century (after 1996). Although the Lumina became a popular seller, GM was widely criticized in the motoring press for being late to the game in introducing a direct aero-designed competitor to the Ford Taurus.

In 1989, the Lumina became the nameplate under which Chevrolets were raced in NASCAR, more than a year before the model was available to the public. Irate fans bombarded NASCAR with letters protesting the unfairness of Chevrolet being allowed to race an aluminum car.

In 1987 however, GM was experimenting with a high end performance version above the Z34 to continue where the Z34 left off. The experimental "Z50" version as it was dubbed featured all-wheel-drive and an all aluminum 5.0 L 305ci LT1-style V8 which had 285 hp (213 kW) and 280 ft·lbf (380 N·m) of torque. It never made it to production. The whereabouts of these test-cars remains unknown. 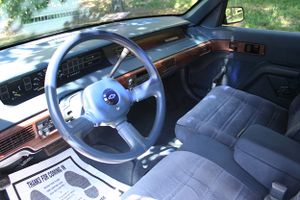 The high performance version of the Lumina was the Lumina Z34. Along with a performance suspension package, it was fitted with the 3.4 L DOHC LQ1 V6, putting out 210 hp at 5200 rpm, and 215 lb·ftf (292 N·m) of torque at 4400 rpm. Unique cosmetic changes include a factory spoiler and body moldings, a louvered hood, and a unique steering wheel. The grille was also replaced with a body-colored panel with a small outlet, reminiscent of the Ford Taurus SHO.Performance figures are quite impressive for a front wheel drive V6 car,with a 0-60(mph) time of 7.5 seconds,1/4 mile (400km) time of 15.0 seconds,although times of mid 14 seconds have been attained,and a (limited) top speed of 130 mph (209.21 km/h).

The Lumina received a major redesign for 1995, and the Monte Carlo name was resurrected for the 2-door version previously sold as the Lumina coupe. The Euro model was dropped, replaced by the LS trim. The LHO V6 was dropped in favor of the L82 V6, also known as the 3100 SFI. This Lumina was also sold with police (code 9C3) and taxi packages after the Chevrolet Caprice was dropped after the 1996 model year. Options included an electric sunroof, leather bucket seats, power driver seat, AM/FM stereo with CD player and the up-level "Sport Performance Package," which changed the trim level from LS to LTZ. The LTZ trim was introduced in 1997 to soften the blow from the discontinued Impala SS and Caprice. Its standard features included 16" brushed aluminum wheels, blackwall radial sport tires, sport tuned suspension and a 3.4 L V6 rated at 210 hp (160 kW) and 200 ft·lbf (270 N·m) of torque, a rear spoiler, restyled front and rear body clips (resembling the Monte Carlo Z34), a tachometer, and a floor-mounted shifter. The 3.4 L V6 was replaced by the 3800 Series II in 1998 which made 200 hp (150 kW) and 225 ft·lbf (305 N·m) torque. Despite its lesser horsepower, the 3.8 liter LTZ demonstrated better performance due to its increased torque, with 0-60 mph (0-100 km/h) times of 7.5 seconds and 1/4 mile (400 km) times of 15.7 seconds. The car has a naturally-limited top speed of 107 mph (172 km/h) and the rev limiter kicks in at 5800 rpm. Because it's very light weight for a mid-size sedan (3350 lbs) it is possible for Luminas to go much faster with little modification. Also in 1998, the Lumina received second generation airbags. The front-wheel drive Chevrolet Impala was introduced as a replacement for the Lumina in 2000, although GM did produce 2001 model year Luminas to be exclusively sold for rental fleets. Sales of the Lumina ended in Canada in 1999. US production ended on April 26, 2001. In some Asian countries, the Lumina continued as a rebadged Buick Century/Regal. In Latin America, the Lumina is sold under the Omega nameplate.

The Lumina was offered with three trim levels. The base sedan was the most popular and came well equipped for its price point. It had standard six-passenger seating, tilt steering wheel, dual airbags, air conditioning and Daytime running lights. It also had fifteen-inch steel wheels with wheel covers and radio with cassette player. The LS sedan was one step above the base and offered features like two cupholders and power windows and door locks. The LS still had the same cosmetic appearance as the base but had richer features. The LTZ was the top trim level and had the best features of them all which included alloy wheels, a more potent 3.8L engine (as opposed the the base and LS 3.1L engine), power driver seat, automatic climate control and leather. A center console was standard on all models as well. 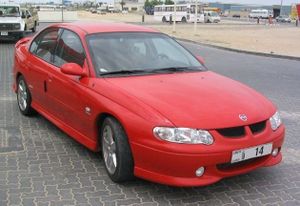 Holden released the all new VE Holden Commodore SS in Australia in 2006. In 2007 it was rebadged and exported from Australia as the newest generation of the Chevrolet Lumina. It is currently being sold in the Middle East and South Africa. The Holden Ute is in South Africa available as the Lumina Ute