The Isuzu Gemini was a compact car built, in several generations, by Isuzu and sold from 1974 to 2000. The same basic product was built and/or sold under several other names, sometimes by other General Motors brands, in various markets around the world.

The first Gemini was the 1974 Bellett Gemini. It was based on the third-generation Opel Kadett on the General Motors T-car platform and came in four-door sedan and two-door coupe body styles.

In addition, Holden in Australia offered the Gemini as a 3 door station wagon and van, which were derived from the Vauxhall Chevette wagon, with Gemini front panels. The Gemini was Wheels magazine's Car of the Year for 1975. The Australian Holden Gemini was fitted with an Isuzu G161Z engine, although some models were available with a diesel variant of an Isuzu G180 engine. The more common G161Z was a 1.6-liter 8 valve SOHC fed by a Nikki carburettor.

In Europe, the 1976 Gemini was equipped with a 1.3-liter engine known as the 1g13c, which was adopted by Opel in Germany for their Opel Kadett.

In Japan, sports models were available under the names ZZ/R and ZZ/T. These were equipped with an Isuzu G180W 8-valve DOHC 1.8-liter engine, most commonly fuel injected, producing 97kW at the flywheel. It is rumoured that these models also came with a factory LSD and a shortened shift throw on manual models.

Isuzu Gemini was also sold in South Korea as Saehan Gemini, whose manufacturer became Daewoo Motors in 1982. It then became Daewoo Maepsy after 1982 and remained on sale until it was replaced by Daewoo Lemans in 1986.

The coupe was replaced in 1981 by the derivative Isuzu Piazza, which was introduced in the United States in 1983 as the Isuzu Impulse. 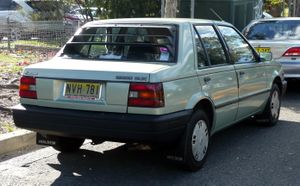 General Motors sought a replacement for their world car T-body Kadett / Gemini, and this time, instead of building one design on several continents, they decided to build a world car in one location and export it to several continents. As T-body manufacturing had been turned over to Isuzu in Japan for economic reasons, so would the manufacturing of the replacement. In 1984, Isuzu again commissioned Giorgetto Giugiaro who was responsible for the 117 Coupe and the Piazza. This time, he was to design an economy car on the new front-wheel drive R-body platform. The R-body featured a MacPherson strut front suspension and beam axle rear suspension, which foreshadowed most of GM's offerings through their current model lineup. Giugiaro's design followed the Piazza design very closely in shape and detail, though the proportions made the Gemini appear shorter and taller in its three door version, and a four door sedan (notch back) was also designed.

Unfortunately for everyone involved, Isuzu presented the designs to GM prior to freezing them, and GM ordered a number of detail changes to them without ever consulting the designer, Giugiaro, which was taken as an insult, and ended the long relationship between the noted Italian designer and Japan's oldest car builder. The insult was serious enough to Giugiaro that he denied the car was his design until a decade after the vehicle went out of production.

The R-body Gemini was introduced in 1985. In Japan, the vehicle was available with a 1.5 liter SOHC engine, 1.5 liter turbocharged engine, and 1.7 liter I4 diesel engine. A 1.6 liter DOHC engine was introduced in late 1987. Trim levels were widely varied, from basic models to Irmscher and Lotus Tuned versions, and plenty of optional equipment and dealer options were available.

In the US, the vehicle was available from Chevrolet (and later Geo) as the Spectrum, or from Isuzu themselves, as the I-Mark. GM's Pontiac division sold the I-Mark as the Pontiac Sunburst in Canada from 1985 to 1988. Pontiac discontinued the Sunburst because it felt that the engine was a little weak and did not have much performance. GM Canada announced that the Sunburst's replacement would be the Passport Optima in 1989. For GM, this was an entry level vehicle to attract young buyers and to compete with the flood of Japanese compact cars flooding the US market. The Spectrum lacked many of the options and equipment of the I-Mark, though both were available with the 1.5 liter SOHC non-turbo and turbo engines, but no diesel engines were offered in the US. The turbo model I-Mark was called the RS model in 1988 and then changed to the LS model in 1989. The I-Mark was available with the 1.6 liter DOHC engine in 1989 only, as the RS model. In 1988 and 1989, the LS and RS models were offered with Lotus Tuned Suspension, the sportier suspension featuring more rigid dampers, alternate spring rates, and bigger sway bars. 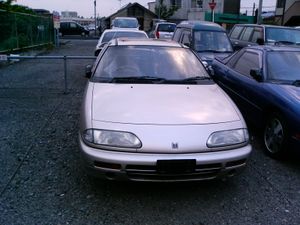 The Gemini was redesigned for 1990, and the coupe version was now renamed the Gemini Coupe. The last models were produced in 1993.

The Isuzu Gemini Coupe was the basis for the Isuzu Impulse and Geo Storm in the United States and Canada, and for the Asüna Sunfire which was sold for the Canadian market for the 1993 model year only.

A 4-door sedan with similar mechanical components was sold as the Isuzu Stylus in the United States and Canada. The Geo versions lacked some of the more expensive and advanced features of the Isuzu (and Asüna) versions.

According to Volume 80 of Car Styling Magazine [1] The design of 4-door sedan was based directly on a design study for GM's Saturn S-Series. GM rejected the design (which had evolved from a prototype known as the "Little Red Car") in 1985 and gave it over to Isuzu.

The 1993 Isuzu Gemini Coupe GT/r was also called the Stylus GT/r it was the last of the Gemini clan. It was replaced by several Honda Civic models.

Isuzu halted production of the Gemini and replaced it with a rebadged version of the Honda Domani.

The 1997 Gemini generation was a rebadged Honda Domani sedan. Production of this model ended in 2000.

In Australia, the 1982–1984 Holden Gemini was assessed in the Used Car Safety Ratings 2006 as providing "significantly worse than average" protection for its occupants in the event of a crash.[2]

Isuzu Geminis and I-Marks were the most popular taxicab models in the Philippines in the 80s and early 90s. Models were phased out and gradually replaced with newer models from Toyota and Nissan.