This article is about a type of vehicle. For other uses, see Suburb.

The Chevrolet Suburban is a large sport utility vehicle from Chevrolet. It is the longest-lived continuous automobile nameplate still in production, dating from 1935 and is likely to be produced under this name for the foreseeable future. For most of its recent history, the Suburban has been a station wagon bodied version of the Chevrolet pickup truck, including the Chevrolet C/K series of truck-based vehicles. It has been traditionally one of General Motors' most profitable vehicles, with relatively high resale value for an American truck and station wagon. The planned replacements for the Chevrolet Suburban and the Chevrolet Tahoe were cancelled by GM executives in 2008.[1]

Many automotive companies in the United States used the "Suburban" name to indicate a windowed, station wagon type body on a commercial frame including Dodge, Plymouth, Studebaker, Nash, Chevrolet, and GMC. With the end of production of the Dodge Town Wagon in 1966, only General Motors continued to manufacture a vehicle branded as a "Suburban", and they were awarded an exclusive trademark on the name in 1988. The Suburban is one of the largest SUVs on the market. It has outlasted many competitive vehicles such as the International Harvester Travelall, Jeep Wagoneer, and the Ford Excursion. The latest competitor is an extended Ford Expedition.

The Suburban of the 1990s and 2000s is a full-size SUV with three rows of seating, a full pickup truck frame, and V8 engine. The trucks are popular with large suburban families due to their "go anywhere, haul anything" nature, but have been criticized for their excessive bulk and poor fuel economy. The Suburban is one of the few station wagons available with all bench rows. Unlike smaller 3-row full-sized SUV's such as the Tahoe, the extra length provides a full-sized cargo area behind the up to 9 passengers to carry their luggage for an extended trip, and tow a sizeable trailer. This class of truck remains much more popular than full-sized vans which can carry even more passengers and tow trailers.

Chevrolet began production of its all steel "carryall-suburban" in 1935. GMC brought out its version in 1937. These vehicles were also known as the "Suburban Carryall" until rebranded simply as the "Suburban" in the 1980s with the arrival of the SUV craze.

General Motors has produced these large SUVs for both its GMC and Chevrolet marques. In 2000 the GMC version was renamed the Yukon XL; Chevrolet models retain the Suburban name. In 2003 Cadillac introduced its version of the Suburban, calling it the Escalade ESV. Seating varies from 7 to 9 depending on the version and options selected. Shorter versions of these vehicles are sold as the Chevrolet Tahoe, GMC Yukon, and Cadillac Escalade. Versions with a pickup bed in place of the rear cargo box are sold as the Chevrolet Avalanche and Cadillac Escalade EXT.

In recent years, the Suburban has been popular as a police car, fire chief's vehicle, or EMS fly-car. Suburbans are also popular when converted for duty as a limousine. The Hard Rock Hotel and Casino in Las Vegas, NV operates a fleet of purple Suburbans to serve VIP patrons and high rollers. On the HBO series The Sopranos Tony Soprano drives a GMT400 model Chevrolet Suburban.

In the late 1990s, GM also introduced a RHD version of the Suburban, badged as a Holden, for the Australian consumer. It proved to be a failure, however, and GM withdrew the Suburban in 2000 from Holden's lineup.

Chevrolet offered a station wagon body, built on the 1/2 ton truck frame. This model was specifically built for National Guard units and Civilian Conservation Corps units. Much of the body was constructed from wood, and could seat up to eight occupants.

Chevrolet offered the body style as a "Carryall Suburban". These share the front sheetmetal and frames of the 1/2 ton pickup models of the same year, but featured all-metal wagon bodies differing very little in shape from contemporary "woodie" wagons. Seating for up to eight occupants was provided, with three in front row, two in the middle row, and three in the rear row. Either rear panel doors or a rear tailgate/lift window were provided for easy loading and unloading of luggage.

Suburbans were built in model years 1941, 1942, and 1946. Seating for up to eight occupants was provided. Models with rear panel doors were designated "3106," while those with tailgates were designated "3116." The Chevrolet versions were equipped a 216 cubic inch 6 cylinder engine. The GMC version was equipped with a 228 cubic inch 6 cylinder engine.

This was the last series to feature "Canopy Express" models.

Engines included I-6 and the small block V-8s. Chevrolet used its 265 V-8 engine, later evolving it to a 283-cubic-inch version. GMC based their V-8 on a Pontiac design. Standard Suburban model numbers continued from the previous series, but the introduction of four-wheel-drive models in 1957 added the numbers "3156" for 4WD Suburbans with panel doors, and "3166" for 4WD Suburbans with tailgates.

The styling of the 1960 - 1961 model year took cues from the late 1950s Chevrolet cars and had large oval ports above the grille. The cab featured a "wrap around" windshield. Both tailgate and "barn door" rear openings were available. From 1962 onwards, the hood styling was 'toned down' a bit, with a more modern looking hood that eliminated the large ports. In 1964, the front glass area was updated to a flatter windshield, and larger door glass.

This model series introduced a factory-equipped 4WD ("K") option for the first time. The 2WD "C" models introduced a torsion bar-based independent front suspension and trailing arm and coil spring rear. But by 1963, returned to a more conventional coil-spring approach.

Engines included both I-6 and small-block V-8s. A 305-cubic-inch 60 degree V-6 was also available on GMC models. The 305 was actually 'brought down' from GMCs medium duty truck line. It featured huge torque numbers, but was also notable for poor fuel economy. 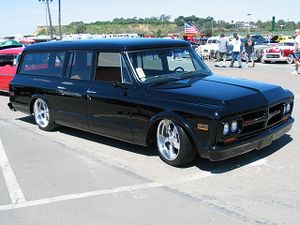 The second generation C/K Suburbans are easily recognised by having only a single drivers side door and two passenger-side doors. They were available in both 2WD and 4WD models. Engines included the six-cylinder (e.g., Chevrolet 292-cubic-inch I-6, and GMC 305 cubic inch V-6), and small-block V-8s of the current model year (e.g., 283, 307, 350, 400-cubic-inch V-8s.) For the first time, a three-quarter ton version was available.

1971 saw the introduction of disc brakes on the front wheels, and 1972 was the last year for coil spring rear suspension on 2WD models.

This series would also be the last to offer C-10 & C-20 Panel truck models for commercial purposes.

Starting with the third generation C/K models, the Suburban was finally a 4-door vehicle. The rounded corners 1970s body style remained largely unchanged for 18 model years - making this series the longest in production of any Suburban. Both 2WD and 4WD models, designated "C" and "K" were offered, as well as one-half ton and three-quarter ton ("10" and "20" on the Chevy, "1500" and "2500" for GMC) models. The one ton model designation was the C or K 30 for Chevrolet and 3500 for GMC.

The base engine was the small-block 350-cubic-inch V-8. A 400-cubic-inch V-8 was optional. The 454-cubic-inch big-block V-8 was now available for the first time, most commonly in the 2WD three-quarter ton models. The 6.2 L (376 cu in) Detroit Diesel V8 engine was also available from 1982-onwards. The Diesel later became the engine of choice for Suburbans exported to Europe from USA.

In 1986 and 1987, the engines were switched from carburetors to electronic fuel injection. The system that GM chose was called throttle body injection, or TBI. The change improved fuel economy, performance, and emissions. Overdrive-equipped 4-speed automatic transmission were also incorporated - in the form of the 700R4 (1/2 ton models) and 4L80 (3/4 ton models).

GM temporarily changed the usual "C/K" designation to "R" and "V" for the 1988 through 1991 model years. This was done to avoid confusion with the GMT400-based C/K pickup trucks, which were introduced in 1988, during the overlap period.

Also this was the last generation to come from the factory with a solid front axle and New Process transfer cases. You could either have manual or automatic hubs on later 1/2 ton models, but 3/4 and early 1/2 tons all had the manual hubs. 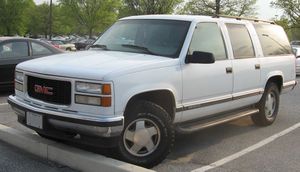 The GMT400-based Suburbans were introduced in the 1992 model year. This was actually quite late compared to their pickup truck brethren - which switched platforms in the 1988 model year. Both 2WD and 4WD models, again designated "C" and "K", were offered, as well as half ton and three-quarter ton ("1500" and "2500") models.

Trim options included a base-level version, the LS, and the LT. Interior seating arrangements allowed for either bucket or bench seating in the first row, and optional 3rd row bench. Thus it could be configured from 2- to 9-passenger seating.

There were a number of mid-life upgrades on the GMT400. These include:

In 1998, Holden premiered the right-hand-drive version of Suburban for local Australian and Kiwi markets with either petrol or diesel motors. However, the sheer size and poor quality material doomed its first foray into the RHD market. Interestingly, General Motors chose to engineer and build the right-hand drive conversion rather than relying on Quigley 4x4, one of the approved and most experienced conversion specialists. Quigley 4x4 had done the exceptional RHD conversion utilising the high quality material and mirror-image dashboard. General Motors instead utilised the modified dashboard from 1995-2005 RHD Chevrolet Blazer.

The GMT800-based Suburbans were introduced in late 1999 as the 2000 model year. Chevrolet sold two models of Suburbans: 1/2 ton and 3/4 ton. They came in either LS or LT trim packages. All models came in either 2wd or optional push button 4wd(w/ low range transfer case). A tow hitch with a trailer brake controller was standard.

2002: Many features from the options list were added to the standard equipment on the LS model, including A/C, Alloy wheels, Power Windows, Power Front seats, and Rear HVAC Controls. A Z71 off-road package was added for 2002, which included special body moldings and special 17-inch (430 mm) wheels with aggressive tread tires, the package was only available with four wheel drive.

2004 (Mexico): The Suburban receives a front end update, matching the one of the Silverado. This update was exclusive to the Suburban, the Sonora (Tahoe) never received it.

2005: Stability control becomes standard on the 1500(1/2 ton) models, and the Z71 was available with 2wd. A navigation system became an option. 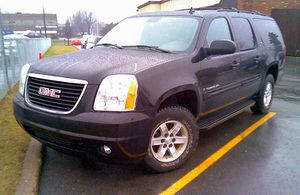 The new models have been redesigned with more modern styling, which has been seen on the already released Tahoes and Yukons. The exterior features a more aerodynamic shape, made partly by a steeply raked windshield angle. The new design has less drag than previous models, making it more aerodynamic.

The interior has a redesigned dashboard and improved seats. It still retains its 9-passenger seating availability, which is available on LS, LT, LTZ, and Z71 models. LT2, LT3, and LTZ models welcome leather seating and available 6, 7, and 8 passenger seating. There is a Z71 Package available which includes two-tone leather seats. In order to get the Z71 package you must have LT2 or LT3.