The Chevrolet Kodiak (and similar GMC Topkick and Isuzu H-Series) is a line of medium-duty trucks from General Motors. It is commonly used as a basis for work trucks, cargo haulers, dump trucks, and similar vehicles which require powerful torque, high GVWR, and high towing capacity. There are aftermarket coachbuilders that build them as pickup trucks and commercial trucks for consumers. The primary competition for the Kodiak/Topkick line is the Ford Super Duty line, though the International CXT competes with it in the consumer world.

The Kodiak and TopKick were introduced in 1980 as stronger versions of GM's existing medium-duty C-Series trucks. "Kodiak" followed the pattern of "frontier beast" names given to heavier trucks such as the Chevrolet Bison and Chevrolet Bruin, while "Top Kick" came from military slang and tied in with GMC's heavy truck names of General and Brigadier. First-generation models can be distinguished by a full-width grille with quad square headlights arranged horizontally in chrome bezels underneath with the GMC lettering or Chevy "bowtie" above the grille; normal 1973-89 C50-C80s had single round headlights and the emblem all incorporated into the grille area.

With the second generation in 1990, all GM medium conventionals took on the "Kodiak" or "Topkick" names, until they were dropped in 1995; these models used the GMT400 pickup cab until 2003, always with the original "square" dashboard dropped from light-duty models in 1995. They are still produced in Mexico.

Beginning in 2004, US-market models moved to a new platform with a more spacious cab based on the GM full-size vans.

A special Kodiak C4500 was introduced at the Chicago Auto Show in 2006. It is clearly aimed at the International RXT, also introduced there, with a DVD-based navigation system and powerful audio system. Pricing begins at $70,000. The two share a number of similarities, such as the options allowed in their premium packages, although the C4500 has higher power (300 hp versus 230hp) and the RXT is a 4x2 drive vehicle with a higher towing capacity at 16,000 lb (7,300 kg).

It was announced on December 20, 2007 that GM's medium-duty truck business, whose products include the Kodiak and Topkick, was being sold to Navistar International [1]. On August 20, 2008 both GM and Navistar announced that their memorandum of understanding for the purchase had expired and was not renewed [2] [3].

United States President Barack Obama will be using a brand-new armored car that will be badged a Cadillac, but will in reality be based on a GMC Topkick chassis. Styling is an enlarged version of the Cadillac DTS complete with notchback, unlike civilian Topkick limo conversions which often use stretched Chevrolet Express van bodies that stretch the boundary between limousine and bus. [4] 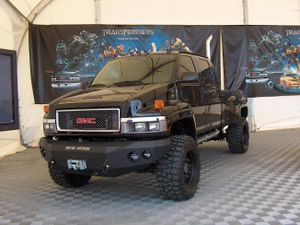 A modified GMC TopKick C4500 (as stated on the official film website and the HD DVD Two-Disc Special Edition) is featured in the 2007 Transformers film as the vehicle mode of the Autobot Ironhide. MTE has announced it will produce a version of this truck for consumers [5].