Chevrolet's small-block V8 is a famous automobile engine. Soon after being introduced, it quickly gained popularity among stock car racers, becoming known as the "Mighty Mouse" motor, after the popular cartoon character of the time. This was often shortened to the "mouse motor"[1] for its compact dimensions and lighter weight, compared to other V8 engines of the time (Chevrolet would later introduce the larger big block engine, which gained the nickname "rat motor"). Production of the small-block began in 1955 with the 265 ci. engine. By 1957 it had grown to 283 cu in (4.6 L), and with the optional Rochester mechanical fuel injection, it became one of the first production engines ever to make one horsepower per cubic inch. This engine was used to power the Corvette, and the Bel Air at that time. It would later be extended to other vehicles as well, and replace the old style 265 V8s. The displacement changed over the years, eventually reaching 400 cu in (6.6 L), but none caught on like the 350 cu in (5.7 L) small-block. This engine is still in production today at General Motors Toluca, Mexico plant (primarily for the GM over-the-counter Goodwrench powerplants), but is no longer offered in current model year vehicles since the year 2004. Its production numbers were impressive, with more than 90,000,000 built. It has been produced in carbureted, mechanical fuel injection, and electronic fuel injection forms.

The small-block was on the Ward's 10 Best Engines of the 20th Century list.

Chevrolet tested the small-block twice with no water and no oil at wide-open throttle. The first time it lasted an hour and 15 minutes and the second time it lasted two hours.[2]

The original design of the small block remained remarkably unchanged for its production run, which began in 1955 and ended, in passenger vehicles, in 2003. The engine is still being built today for many aftermarket applications, both to replace worn-out older engines and also by many builders as high-performance applications. There were, however many minor changes made to the engine over the years; these changes are listed below.

(Small Block/second generation) This engine was produced from 1996 to the present for racing applications only. The cylinder heads were redesigned and the lifter bores were offset. The valve sequence for each head was changed from the traditional E-I-I-E-E-I-I-E to a new I-E-I-E-E-I-E-I and because of this the camshaft was redesigned. 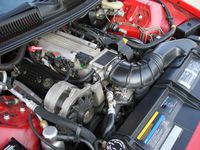 See the GM LT engine page for more information on the Generation II small-block V8s, which differ mainly in their reverse-flow cooling system. 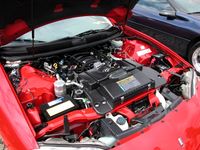 The first small block Chevrolet V-8 was a 265 cu in (4.3 L) engine that was developed in 1955 for the Corvette. The small block has remained popular due to its relatively compact size, light weight, and extensive aftermarket support.

The 265 cu in (4.3 L) V8 was the first Chevrolet small block. Designed by Ed Cole's group at Chevrolet, it filled the power gap in the 1955 Corvette lineup, producing an impressive 250 hp (186 kW). The little engine went from drawings to production in just 15 weeks. Besides its compact dimensions, the small-block was known for its novel green-sand foundry construction process.

Dimensions were oversquare - 3.75 in (95 mm) bore and 3 in (76 mm) stroke. The small-block's 4.4 in (111.8 mm) bore spacing would continue in use for decades. It was a pushrod cast-iron engine with hydraulic lifters and a 2-barrel or 4-barrel Rochester carburetor. The 1955 conventional passenger car version produced 162 hp (121 kW) with a 2-barrel carburetor, or could be upgraded at extra cost to a "Power Pack" version conservatively rated at 180 hp (134 kW) with a four-barrel Rochester and dual exhaust. The first production year of this engine had no provision for oil filtration built into the block; however, an add-on filter mounted on the thermostat housing was installed during production. Due to the lack of adequate oil filtration provisions, the '55 model year block is typically only desirable to period collectors.

The 1957 engine featured Ramjet mechanical fuel injection, allowing the engine to produce 1 hp (1 kW) per cubic inch, an impressive feat at the time. For 1961, an amazing 315 hp (235 kW) was available from this unit.

Chevrolet produced a special 302 cu in (4.9 L) engine for Trans Am racing from 1967-1969. It was the product of placing the 3-inch stroke crankshaft into a 4-inch bore block. Although the 283 also used a 3-inch stroke crankshaft, it was a low performance cast iron crankshaft. The crankshaft for the 302 was specially built of forged steel. This engine was used only in the first-generation Camaro Z28. Conservatively rated at 290 hp (216 kW), actual output was around 375 hp (280 kW). This block is one of 3 displacements that underwent a transformation for the 1968/1969 period when the main bearing size was increased from 2.30 in to 2.45 in.

One of the biggest myths about the 307 is that all the blocks were cast with a very low nickel content. However, some 307 blocks, such as casting number 3970020 with suffix VxxxxTHA (x's in place for date), had 010 and 020 stamped under the timing chain cover indicating high tin and nickel content.

This section documents the odd-size small blocks developed after the 350 appeared in 1969. Many of these basic blocks are variations of the 350 design.

This engine was used in the following cars:

It was available with a Rochester Dualjet 210 - effectively a Rochester Quadrajet with no rear barrels. After 1980, electronic feedback carburetion was used on the 267.

While similar in displacement to the other 4.3-4.4 L V8 engines produced by General Motors (including the Oldsmobile 260 and Pontiac 265, the small bore 267 shared no parts with the other engines and was phased out after the 1982 model year due to inability to conform to emission standards. Chevrolet vehicles eventually used the 305 cu in (5 L) as its base V8 engine.

The 305 was used in the following cars:

The L69 was the last true H.O. engine. The High Output 5 L (305 cu in) , featuring higher compression of 9.5:1 with heads of the to-be-discontinued LU5 Cross-Fire fuel injection engine, and utilizing camshaft and 4" catalytic converter of the 5.7 L (350 cu in) L83 which was used on the Corvette of 1982 and 1984. Complete with a 2.75 inch exhaust system, topped by a recalibrated 4-barrel carburetor, dual snorkel air cleaner assembly, aluminum intake manifold, aluminum flywheel, electric cooling fan, and furthermore a knock sensor including more aggressive spark timing, this engine produced 190 hp (142 kW) @ 4800 and 240 lb·ft (325 N·m) of torque @ 3200 rpm. In most cases, being mated to a 3.73 or 3:42 ratio limited slip rear axle and a T5 5-speed or 700R4 automatic, this engine provided its driver with a wide range of rpm to play in.

Not to be confused with Buick V8 engine, Oldsmobile V8 engine, or Pontiac V8 engine.

The first generation of Chevrolet small-blocks began with the 1955 Chevrolet 265 cu in (4.3 L) V8. But it was the 350 cu in (5.7 L) series that came to be emblematic of the Chevrolet small block V8 engine. The engine's physical dimensions (oversquare 4.00-inch bore and 3.48-inch stroke, 102 mm by 88 mm) are nearly identical to the 436 hp (325 kW) LS3 engine of today, but much has changed. It is by far the most widely used Chevrolet small-block; it has been installed in everything from station wagons to sports cars, in commercial vehicles, and even in boats and (in highly modified form) airplanes.

First usage of the 350 was in the 1967 Chevrolet Camaro and 1968 Nova producing 295 horsepower (gross); other Chevrolet vehicle lines followed suit in the year 1969.

The GM Goodwrench 350 crate engine comes in several variations. The lowest priced uses the pre-1986 four-bolt casting molds with two dipstick locations; pre-1980 on the driver's side and post-1980 on the passenger's side. This engine was produced in Mexico since 1981 as the Targetmaster 350, and now the GM Goodwrench 350. 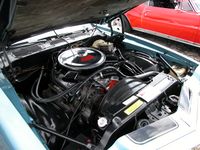 There was also a later small-block engine called the "LT1".

In 1972 the only way to get a L48 (4bbl V8) in a Chevy Nova was to get the Super Sport Package. This is indicated by the 5th digit in the VIN being a "K". 1972 was the only year you could verify the Super Sport package by the VIN.

The LM1 is the base 5.7 L (350 cu in) with a 4-barrel carburetor (usually with a Rochester Quadrajet) in passenger cars until 1988. Throughout its lifespan, it received either a points, electronic, and/or computer-controlled spark system, to conventional and feedback carburetors.

LM1s were superseded with the LO5 powerplant after 1988.

The L05 was introduced in 1987 for use in Chevrolet/GMC trucks in both the GMT400 (introduced in April 1987 as 1988 models) and the R/V series trucks such as the K5 Blazer, Suburban, and rounded-era pickups formerly classed as the C/K until 1996 which includes chassis cabs and 4-door crew cabs. Although usage was for trucks, vans, and 9C1-optioned Caprices, the L05 was also used with the following vehicles:

The L31 replaced the LO5 in 1996 - known as the Vortec 5700. Known as the GEN 1+, this was the final incarnation of the 1955-vintage small block, ending production in 2005 with the last vehicle being a Kodiak/Topkick HD truck. Volvo Penta and Mercury Marine still produces the L31. The "MARINE" intake is a potential upgrade for L31 trucks.

From the 1950s through the 1970s, each GM division had its own V8 engine family. Many were shared among other divisions, but each design is most-closely associated with its own division:

GM later standardized on the later generations of the Chevrolet design: