The Family II is a straight-4 piston engine that was originally developed by Opel in late 1970s for use in the Opel Ascona B and Opel Kadett D. Over time, the engine block has evolved to include many modern features such as DOHC and fuel injection. Family II has also expanded to include a range of Opel derived 6 cylinder engines. Many General Motors subsidiaries, including Holden, GM do Brasil and recently GM Powertrain have adopted this design. It is also starting to be used in hot rods as an engine swap.

These engines formed the basis of the modern Family II lineup. Configuration was limited to a single over head cam, and 2 Valves per cylinder (8 valves total). The 20NE served as the base, where later Family II motors evolved.

The 2 liter 8v OHC engines is used in the base versions of:

The naturally-aspirated 16-valve version of the 2.0 L— 1998 cc (121.9 cu in) — cast iron block engine is the successor to the OHC-engines and a predecessor to the 16-valve Ecotec-line of engines.

This lineup features the same block as the OHC based engines with an 86 mm (3.4 in) bore & stroke and a Cosworth-developed DOHC cylinder head (Cosworth Project KB). The cylinder heads were manufactured by either Cosworth or, at a latter date, Kolben Schmidt. In general, the heads from this lineup are supposed to flow appreciablу better than their Ecotec successors. Power output is rated at 110 kW (150 hp) at 6000 rpm and 196 N·m at 4600 rpm (C20XE) or 156 hp (20XE).

These engines were used in:

The turbocharged version of the C20XE, branded C20LET was also offered in the Opel/Vauxhall Calibra and Vectra Turbo. The C20LET is essentially the same as the C20XE, bar the lower compression, forged Mahle pistons turbocharger, Bosh Motronic M2.7 with MAP a sensor. There are also slight revisions to the block which provide an oil inlet/outlet for the turbocharger.

Opel later developed a 2.5 liter V6 engine based on the C20XE's design. The V6 powerplant featured four camshafts and 4 valves per cylinder. The C25XE found use in the V6 Calibra/Vectra A/A2/Omega B.

The first engine Opel branded as Ecotec, a mass-market successor to the C20XE with a Lotus-developed cylinder head. The new cylinder head had a smaller valve angle compared to the older C20XE, which was supposed to give more torque in the lower revs. It is a 1998 cc (121.9 cu in) naturally aspirated engine with 16 valves and belt driven double overhead camshafts (DOHC). 86 mm (3.4 in) bore and stroke in cast iron OHC-derived cylinder block and aluminium cylinder head. X20XEV was equipped with exhaust gas recirculation (EGR) to reduce nitrogen dioxide emissions and air injection reactor (AIR) to speed up the warming up of the catalytic converter and to reduce unburnt hydrocarbons and carbon monoxide. Power 100 kW / 136 hp.

This engine was used in:

A V6 engine - essentially an Ecotec version of the C25XE. It has similar design features to the X20XEV - particularly the cylender heads and emission reduction hardware. This engine was used in the Opel Omega.

The X25XE was also used in Later Models of Vectra B from 2000 until 2002. It was to prove popular in Police Vehicles in the UK.

The Ecotec name was adopted in 2000 for the new generation of Family II engines. The name was already used for the Opel GM Family II engine, Family 1 and Family 0 ranges. GM intends this new Ecotec to become its global 4-cylinder.

The Ecotec Family II is a DOHC 4-valve design with an aluminum block and head (L850 for 86 mm bore applications, and L880 for 88 mm bore), designed for displacements from 1.8 to 2.4 L. It was developed by an international team of engineers and technicians from Opel's International Technical Development Center in Rüsselsheim, Germany, GM Powertrain in Pontiac, Michigan, and Saab in Trollhättan, Sweden. Much of the development work on this project was carried out by Lotus Engineering, Hethel, United Kingdom. The engine uses aluminum pistons and cast iron cylinder liners. Vibration is reduced with twin balance shafts.

The current Ecotec line is manufactured in Tonawanda, New York, Kaiserslautern, Germany, and (for Saturn) in Spring Hill, Tennessee. 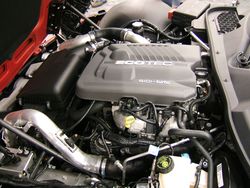 Ecotec LNF in a Pontiac Solstice

It will also be sold and used in:

A high-end direct injection version of the 2.2 L Ecotec is available for: 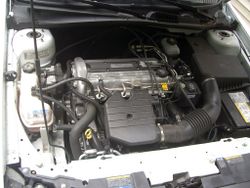 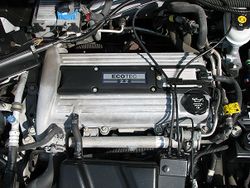 The basic Family II architecture was substantially reengineered in 2000, becoming the Ecotec 2.2, model L61 (or L42 for the CNG version). First appearing in the 2000 Saturn LS1, the L61 spread throughout North American GM products, displacing the Quad 4 and its descendents.

Unlike its notably harsh predecessor, the L61 was designed for smoothness. dual in-block balance shafts were integral to the design, and all accessories were mounted directly to the engine block to reduce vibration. The oil filter was cast into the block with a removable cover and replaceable paper element.

There are a few variations to the standard L61. The new Chevrolet Malibu uses a version with electronic throttle control and a special unitized exhaust manifold and catalytic converter. The 2003 Saturn L-Series has a high output version with higher (10:1) compression and more aggressive camshaft. The Malibu and Saturn versions also use return-less fuel injection. The 2002 Saturn VUE was the first North American variant of the L61 to be equipped with electronic throttle control, whereas other applications did not arise until 2005 in the Saturn ION and Chevrolet Cobalt.

In 2007 the L61 was upgraded with a second generation cylinder case, Coil on plug ignition, 58x crankshaft position sensing and a 32-bit computer.

The 2.2 L Ecotec is used in the following cars:

Following the GM-Fiat agreement, the 2.2 L engine is also used in 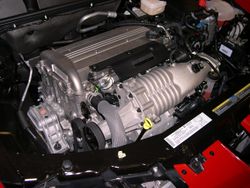 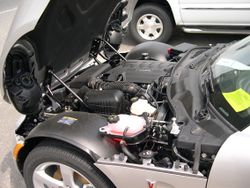 The LE5 is also used in the following overseas models:

The LAT is the designation used for the 2.4 L LE5 when used in GM's mild hybrid vehicles.

The LAF is an direct injected 2.4L that delivers an estimated 180 horsepower (134 kW) @ 6700 rpm and 172 lb.-ft. of torque (232 Nm) @4900 rpm. It uses technology based on GM’s other four-cylinder direct injection applications, but with unique features designed for its specific application. This includes an 11.4:1 compression ratio that helps build power, slightly dished pistons that increase combustion efficiency and injectors with an application-specific flow rate.

Holden makes various Family II engines for GM India and GM Daewoo at its Melbourne plant. Variations include displacements from 1.8 L to 2.4 L. Unlike the Ecotec engines, the block is made of iron.

The engine has been used on following vehicles:

In 2004, a 2.0 L MultiPower engine was made available for the taxi market which could use gasoline, alcohol and natural gas.

GM In the Ariel Atom

In late 2005 Brammo Motorsports struck a deal with GM for a Supercharged 2.0 L Ecotec for their Ariel Atom. The engine came in various ratings from 205 hp (153 kW) to 300 hp (220 kW). Jay Leno received the very first Atom for commercial sale in the US by Brammo.

GM supports the owners of its ECOtec vehicles by holding owners meets at various auto enthusiast events across the country[clarification needed]. These events offer Q&A with ECOtec engine engineers, meet-n-greet's with the GM Race car drivers and inside info before it's released anywhere else. At most events GM brings out cars that are not yet in production to give current owners a "sneak peek" at the new line of ECOtec powered vehicles before they hit the streets.