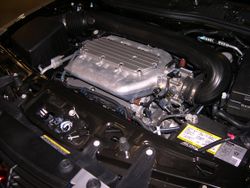 The L66 is an OEM V6 engine built by Honda but sold by General Motors in the Saturn Vue SUV. The L66 was acquired as part of a swap with Honda, who received the Circle L 1.7 L Diesel straight-4 for use in European Civics.

It is a 3.5 L (3471 cc) SOHC V6 with VTEC Variable Valve Timing and is made by Honda in Anna, Ohio. The same engine, the J35A3 is used in Honda's Acura MDX SUV. It is built at Honda's Anna, Ohio engine plant. It is interesting to note that the parts content sticker on the 3.5 L Vue states the country of origin to be Japan for both the engine and transmission.