JTD (uniJet Turbo Diesel) is Fiat Group's term for its current common rail turbodiesel engine range. The MultiJet name is used in the second generation JTD common rail units. Most of the Fiat, Alfa Romeo and Lancia range has JTD engines. Ownership of some Fiat JTD designs is shared with General Motors as part of a settlement of the failed merger between the two auto conglomerates. GM Powertrain Europe group in Turin, Italy manages their interest in these engines. Some PSA Peugeot Citroën diesel engines are also rebadged as JTD. A new generation JTD engine, Multijet II is under development and will be available in 2009, the Fiat Powertrain Technologies sees its very important step in diesel technology. This new technology will be first available for the 1.3 litre JTD engine.[1]

A small 1.3 L (1248 cc) version (called the SDE, Small Diesel Engine) is produced in Bielsko-Biała, Poland. The Multijet 75 PS version was chosen in 2005 as the International Engine of the Year in the 1-litre to 1.4-litre category.

There are four versions of this engine: a 70 PS (69 hp/51 kW), a 75 PS (74 hp/55 kW) (used in the Fiat Punto, Panda, Palio / Albea, Fiat Idea, Opel Corsa / Combo, Opel Meriva and Suzuki Swift), a variable inlet geometry 90 PS (89 hp/66 kW) (used in the new Fiat Grande Punto, Fiat Linea, Opel Corsa and Opel Astra), and a 105 PS (104 hp/77 kW) is available to Lancia Ypsilon. At the time of the launch this was the smallest four-cylinder diesel engine available and has a fuel consumption of 3.3 L/100 km (86 mpg-imp; 71 Template:Convert/fourmregb) in some applications. The engine is able to meet Euro IV pollution standards without the use of a diesel particulate filter.

Opel also uses a version of this engine. Their CDTI engine, manufactured in Pratola Serra, Italy and Kaiserslautern, Germany, is the product of the half-decade joint venture between GM and Fiat. It is used in the Vectra, Signum, Astra, Zafira, Cadillac BLS and Suzuki SX4 as well as some Saabs marked as TiD and TTiD (twinturbo version). 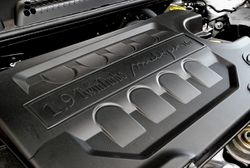 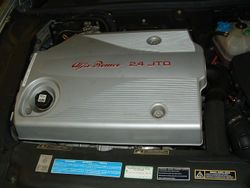