The Lada Niva (Template:LangWithName) is an off-road vehicle built by Russian automaker AutoVAZ. The car is very popular in its home country. It is also popular in Canada (though withdrawn from sale in 1997 it still has a cult following), South America, Europe, and other regions where the terrain requires a robust and tough car for a reasonable price. In Australia, popularity is limited as the vehicle is manufactured for a very different climate and many Nivas imported to Australia were rejects from the European Market.

It was one of the first off-road vehicles to feature a unibody architecture and a predecessor to current crossover SUVs. Before it was introduced to the UK, it was referred to by some in the motoring press as the 'Russian Range Rover'.

The Niva (2121) was Lada's (VAZ/AvtoVAZ) first non-Fiat based model. Much of its mechanicals are carried over from the Fiat based Lada models, though the body, four-wheel drive system, and front suspension were designed by Lada. Production began in 1977 and continues today (as of 2008) with only minor changes to the engine, rear hatch design, and interior trim levels. 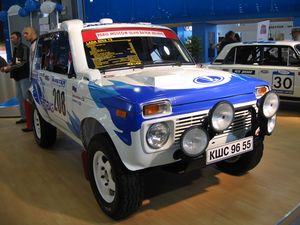 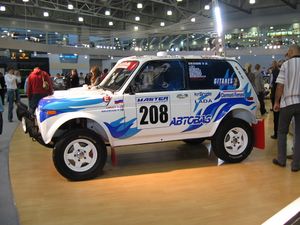 A 1.7-litre petrol engine was introduced later in production, as was fuel injection supplied by General Motors. Around this time the rear hatch was revised to have a lower opening. In some markets a 1.9L Peugeot diesel powered Niva was sold.

Coil springs are located at each of the four wheels, and suspension is independent in front, whereas the rear axle is a 5 link live-type, with ratios between 3.90 and 4.30 depending on the model and market. Ground clearance is good at 235 mm (9.25 in) and water 510 mm (20 in) deep can be negotiated.

The brakes (disc front, drum rear) are servo-assisted dual-circuit style and the clutch is hydraulic. The turning circle, at 36.25' is adequate, while the centre of gravity is exceptional. Cargo space is 0.48 m³ (17 ft³), or 1.33 m³ (47 ft³) with the rear seats folded down. A spare tyre is located in the engine bay under the bonnet, and as with all Ladas, a 21 piece toolkit is also supplied for do-it-yourself roadside repairs. The latter feature is considered a useful and practical feature by off-road fans.

During the 1980s local Lada importers in various markets made their own upgrades to help compete with more modern SUVs. In the UK the Cossack model featured large body decals, roof rails, running boards, 15" alloy wheels, and on some versions a sunroof, steel bullbars, spotlights, a rear-mounted spare tyre and semi-bucket seats. Other markets' importers made similar upgrades and many were also called Cossack.

In 1995, Lada UK introduced a face-lifted version of the Niva Cossack and renamed the basic model as the Hussar. Whereas the Hussar had the original 1977 trim, the new UK Cossack featured a new Rover-designed grille and other body kit items, and gained soft nudge-bars at the front in deference to public opinion against bullbars. Both models received the same new 1.7-litre engine and a new deeper tailgate which extended the rear opening to the level of the bumper - a vast improvement over the original model's high lip. Official Niva imports to the UK ceased in 1997 due to the importers having difficulty in sourcing the GM fuel injection unit required to satisfy ever-tightening UK emissions regulations.

In 1974, when VAZ 2121 development was almost finished, the engineers from Tolyatti began working on an amphibian off-roader, VAZ 2122 'Reka' ('River') based on VAZ-2121 'Niva' underpinnings. It was supposed to offer the car to the Soviet Ministry of Defence. Six evolutions of prototypes were built, much development work has been done. The car was tested in experimental military unit, on the proving grounds belonging to Ministry of Defence, and in the Turkmenian desert. VAZ-2122 received very positive feedback, and in 1987 VAZ finished all development work: car was ready for production.

By the end of the eighties, the Ministry of Defence did not have the financial resources necessary for the mass production of VAZ-2122. As a result, VAZ-2122 did not see series production.

Uses of the Niva

In Russia and Europe the Niva has been used as an ambulance, a military vehicle, and by various police forces (eg Slovakia) and utility companies (eg Manx Electricity Board). 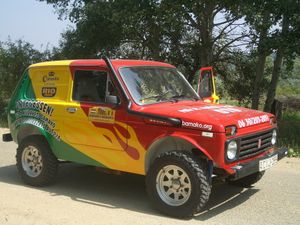 Transmanche-Link, the commercial consortium that built the Channel Tunnel between England and France, used a fleet of 45 Nivas to aid in the enormous project. Each Niva accumulated in excess of 70,000 kilometres (43,000 mi) off-road during its employment, and after construction had been completed in 1993, the fleet was sold off to a local dealer.

In Brazil, during the early 1990s, Niva was the best-selling off-road vehicle. In fact, the Niva was so cheap, that even with the 85% importation value tax, Niva was less expensive than Brazilian cars such as the Envemo or Gurgel. It sold so much more than the Gurgel Carajás, that Gurgel discontinued it in January, 1991. The Niva was the first imported 4X4 in the Brazilian market, following then-Brazilian president Fernando Collor's permission of the importation of foreign vehicles in 1990. In the Brazilian market, a used 1991 Niva, in good condition, costs about US$3,000/R$6,000. Competition and higher importation value taxes, forced the Niva to be retired from the Brazilian market. Even so, thousands of Niva remain in use in Brazil. Lada Niva was the first imported car to have success in the Brazilian market. Its low price and reliability were responsible for the end of production of Gurgel jeeps in 1991. Between 1990 and 1993 it was the best selling off roader in Brazil.

Nivas have been driven on land, up mountains, through mud, and underwater.

Car manufacturer Bognor in Uruguay assembled a version, the Bognor Diva released in 2004. 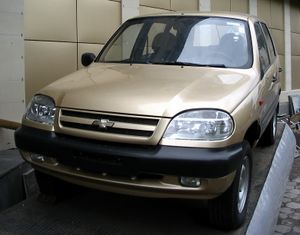 GM-AvtoVAZ, a joint venture between AvtoVAZ and General Motors, produces the Chevrolet Niva. The car was previously known as VAZ 2123 in the design stage. It features an updated body and 1.7-litre gasoline engine with fuel injection. Although the body and the interiors are new, it is still based on the old VAZ 2121 engine, transmission and most mechanicals. Its off-road ability is exemplary compared with many modern budget SUVs, having been designed for tough tundra territory.

An export version with reinforced hull, 1.8-litre Opel Ecotec Family 1 gasoline engine and Aisin four-wheel drive was considered since 2003. Although most of the engineering work has been completed, the release was constantly postponed. Although the GM-AvtoVAZ considered building a new engine plant for the local production of Ecotecs, in July 2005 it was announced that the project is cancelled and so are the plans for the long-anticipated "export" Niva. However, the project was revived in Fall 2006 and the "Niva FAM1" was introduced as a new trim for 2007 model year. The price has nearly doubled, so the market prospectives of this trim are not clear.