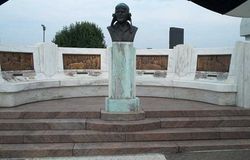 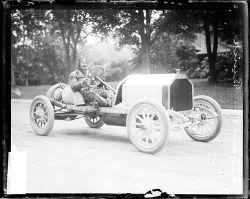 Louis Chevrolet in a Buick racer in Crown Point, Indiana, during the Cobe Cup Race in 1909

Louis Chevrolet in a Buick he designed, circa 1900

Louis-Joseph Chevrolet (December 25, 1878, La Chaux-de-Fonds, Canton of Neuchâtel, Switzerland – June 6, 1941, Detroit, Michigan), of French descent was a racing driver and a co-founder (with William C. Durant) of the Chevrolet Motor Car Company, which was acquired by General Motors and is their bestselling brand nationwide and in many cases synonymous with General Motors itself.

In 1886 his family left Switzerland to live in Beaune, in the Côte-d'Or département of France. It was there as a young man Louis developed his mechanical skills and interest in auto racing. He worked for the Roblin mechanics shop from 1895 to 1899, at which time he went to Paris, where he worked for a short time before emigrating to Montreal, Quebec in Canada in 1900 to work as a chauffeur/mechanic. The following year, he moved to New York City, where he worked briefly for a fellow Swiss immigrant's engineering company, then moved to the Brooklyn operations of the French car manufacturer de Dion-Bouton. In 1905, he was hired by FIAT as a racing car driver, and a year later became employed by a Philadelphia company developing a then-revolutionary front-wheel drive racing car. His racing career continued as he drove for Buick, becoming a friend and associate of Billy Durant.[1]

With little in the way of a formal education, this mechanical genius learned car design while working for Buick and started designing his own engine for a new car in 1909. He built this overhead valve six-cylinder engine in his own machine shop on Grand River Boulevard, Detroit.[2] Shortly thereafter, he would partner with Durant to start the Chevrolet Motor Car Company there. Chevrolet had differences with Durant over the design and in 1915 sold Durant his share in the company. The next year, the company was folded into Durant's General Motors.

At that time, Chevrolet shifted into the racing car industry, partnering with Howard E. Blood of Allegan, Michigan to create the Cornelian, a state-of-the-art racing car, which he used to place 20th in the 1915 Indianapolis 500 automobile race. In 1916, he and his younger brother Gaston started Frontenac Motor Corporation, designing and producing another line of racing cars. They became well-known for, among other things, their Fronty-Ford racers.

Louis also competed in the Indianapolis 500 four times, with a best finish of 7th in 1919. Younger brother Gaston won there in 1920 in a car Louis built, and brother Arthur also competed twice.

Louis Chevrolet died nearly penniless, and is buried in the Holy Cross and Saint Joseph Cemetery in Indianapolis, Indiana. His bust stands at the entrance to the museum at the Indianapolis Motor Speedway.