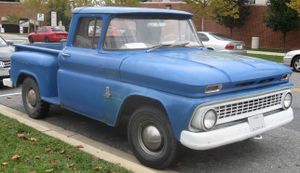 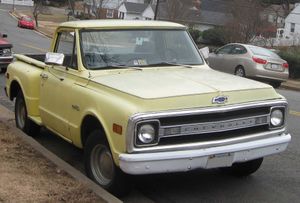 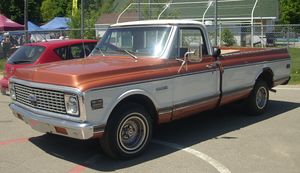 1967 A new, more modern look came in 1967. It was with this revision of the C/K truck that General Motors began to market trucks as general transportation rather than as work vehicles and nothing else. The majority of 10 and 20 series Chevrolet trucks from 1967 to 1972 were shipped with a coil spring trailing arm rear suspension, which greatly improved the ride over traditional leaf springs. However, leaf spring rear suspension was available on all trucks, and standard on 30 series trucks. GMC models came standard with leaf springs with coils springs optional; all four-wheel drive models (Chevrolet & GMC) had leaf springs on both axles. The standard drivetrain came with a 3 speed manual transmission and one of two engines; the 250 in³ straight-6 or the 283 cu in (4.6 L) V8. The optional transmissions were the 4 speed manual, the Powerglide and the Turbo-Hydromatic. The 292 in³ straight-6 and the 327 in³ V8 were the optional engines. The 1/2 ton trucks came with a (6 x 5.5") bolt pattern. However the 3/4 and 1 ton trucks came with (8 x 6") bolt pattern.

1968 In 1968, the 283 cu in (4.6 L) V8 was replaced with a 307 cu in (5 L) and a 310 hp (231 kW), 396 cu in (6.5 L) V8 was offered for the first time. The most visible change in differentiating a 1968 from a 1967 was the addition of side-marker reflectors on all fenders. Also, the small rear window cab was no longer available. The GMC grille was revised, with the letters "GMC" no longer embossed in the horizontal crossbar. Another note for restoration is that the front of the 1967-68 hood was slightly less (approx. 65 degree angle)sloped and without 67-68 fenders, the hood will not fit 1969-1972 models. Another addition was the Custom Comfort and Convenience interior package that fell between the Standard cab and CST cab options. 1968 was also the year that Chevrolet celebrated 50 years of truck manufacturing. Also in 1968 the 3/4 ton Longhorn model was added to the lineup. The Longhorns were designed with a strong 8 1/2 foot box that could hold a big slide-in truck camper.

1969 1969 saw a new V8 engine: a 255 hp (190 kW), 350 cu in (5.7 L). Along with the new engines came a new grille design for Chevrolet trucks and a more upright hood for both Chevrolet and GMC trucks. A utility variant known as the K5 Blazer was also introduced with a shorter wheelbase of 104 inches (2,642 mm). The GMC version, known as the Jimmy, was introduced the same year. Some internal cab changes were also made, most notably the switch from a hand-operated parking brake to a foot pedal, and a more modern looking 2-spoke steering wheel with plastic horn button replaced the previous year's 3-spoke wheel with chrome horn button. Also new this year was upper and lower side moldings, which added another two-tone paint option. These were standard on CST trucks, and optional in any other trim level.

1970 The only noticeable change for 1970 was a minor update to the Chevrolet grille. At first glance, the 1969 and 1970 grille appear identical. However, 1970's plastic inserts actually have highlights that break the appearance into 6 separate sections.

1971 Several changes occurred in 1971. First came another new grille design (the "egg crate") for Chevrolet trucks and black paint over portions of the GMC grille. Second, an additional trim package was introduced: the Cheyenne. On GMC models, this was referred to as the Sierra. These packages consisted mostly of comfort features — nicer interiors, more padding and insulation, carpet, chrome trim, and upper and lower side molding and tailgate trim. 1971 was the first year for AM/FM radios factory installed. Finally, the front brakes on all light-duty trucks were switched from drum brakes to disc brakes, resulting in much less brake fade under heavy use. While many prior C/K half-ton trucks had used a six-lug bolt pattern (6 x 5.5") for the wheels, two-wheel-drive models switched to a five-lug pattern (5 x 5" bolt circle) common to Buick, Oldsmobile, Pontiac, and Cadillac passenger cars. The 1/2 ton 4 x 4 retained the 6 lug bolt pattern. This bolt pattern would remain the standard through the end of the C/K series (along with the Chevrolet/GMC vans). Also, Chevrolet changed the 396 V8 emblem designation to 400 V8. The change was only cosmetic.

1972 1972 models were virtually identical to 1971 models with the only change being that the rear view mirror was glued to the windshield instead of being bolted to top of the cab, and metal or plastic flat door panels were no longer available; all trim levels had a more sculpted molded plastic door panel with integral armrests and wood grain inserts on Cheyenne and Sierra trim levels. 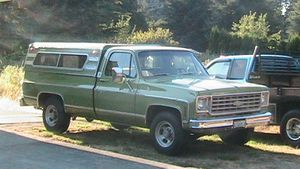 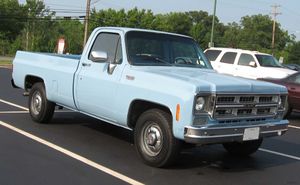 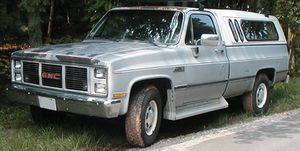 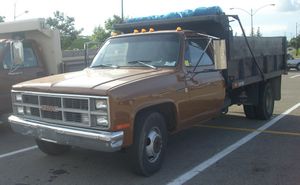 1981 body gets a facelift. Some options are removed or added.

The Third Generation of Chevrolet's full size pickup-truck line featured what became, well after production ended, a controversial design change. The fuel tank was relocated from the cab to outboard sides of one or both frame rails beneath the cab floor extending under the leading edge of the bed, commonly referred to as sidesaddle. This enlarged fuel capacity from 16 up to 40 gallons depending on wheelbase and the number of tanks. This also removed the tank from the passenger compartment.

According to the now debunked 1993 report aired on Dateline this placement made the trucks capable of exploding when involved in a side impact accident[4]. Fatality figures vary wildly. A study by Failure Analysis Associates found 155 fatalities in these GM trucks between 1973 and 1989 involving both side impact and fire[5]. The Center for Auto Safety Ralph Nader's lobbying group, lists "over 1,800 fatalities" between 1973 & 2000 involving both side impact and fire.[6] GM never issued a recall, as recommended by the NHTSA. In 1993 the bad publicity generated by the later debunked Dateline story spawned several class action lawsuits. As settlement GM offered owners $1000 coupons toward the purchase of a new truck with a trade-in of the old one. Even though the trucks met NHTSA 15 and 20mph side impact crash test standards in place at the time of manufacture GM eventually settled with the NHTSA in 1994 for the amount of $51 million to be used for safety programs. The Fourth Generation (1988-2001) was designed and produced well before the lawsuits with one fuel tank inside the frame rails. 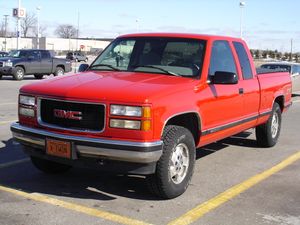 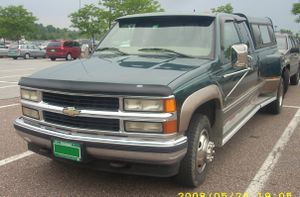 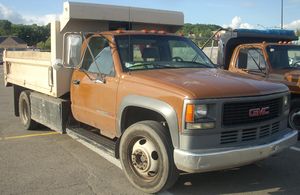 Introduced in April 1987 as 1988 models (known as the GMT400 platform), there were eight different versions of the C/K line for 1988: Fleetside Single Cab, Fleetside Extended Cab, Fleetside Crew Cab, and Stepside Single Cab, each in either 2WD (C) or 4WD (K) drivelines. All C/K models would ride on independent front suspension. Three trim levels were available: Cheyenne, Scottsdale, and Silverado. Engines were a 160 hp (119 kW) 4.3 L V6, a 175 hp (130 kW) 5.0 L V8, a 210 hp (157 kW) 5.7 L V8 and a 6.2 L diesel V8. A 230 hp (172 kW) 7.4 L V8 was available in the 3/4-ton and one-ton trucks. In 1989, a fleetside Sport package was available with matching body color bumpers and grille, chrome wheels, and fog lights. A Z71 off-road package was also available with skid plates and Bilstein shocks. The Work Truck (W/T) was also introduced in 1990, which featured a single cab long bed with Cheyenne trim and new grille with black bumpers. Also in 1990 the GMC 3500 EFI with a powerful 454 (7.4 L) was available. The 454 EFI produced 230 hp (172 kW) and 385 lb·ft (522 N·m). In 1991, the 4L80-E automatic transmission was available for the 3/4-ton and one-ton trucks. In 1992, the 4-speed manual transmission was dropped and the stepside trucks were available with extended cabs. The 6.5 L diesel V8 was also made available with a turbocharger. In 1993, the Sport package was made available for the stepside models, featuring body color bumpers, mirrors, and grille with cast aluminum wheels. The 700R4 transmission was replaced with the 4L60-E automatic in 1993 also. In 1994, the 6.2 L diesel V8 was dropped and the trucks received grille updates. In 1995, the trucks received an updated audio system and interior (including full instrumentation with tachometer standard). Four wheel ABS brakes were made standard in 1995 as well as driver's side airbag on 1/2 ton models. The Vortec V8s were introduced in 1996, with power boosts across the board for the gasoline engines, thanks to high-flow cylinder heads, new camshaft, roller valve lifters and a higher compression ratio. Speed sensitive steering was introduced on the trucks in 1997 along with a passenger side airbag. 1998 saw a revision to the steering wheel and airbag system and also the addition of the PASSLOCK II antitheft system.

This platform was one of two where the traditional small-block Chevrolet V8 was last used (the G-series van was the last platform using the small block until the end of the 2002 model year).

In 1991, GM introduced (under the Chevrolet and GMC nameplates) a truck that bridged the gap between pickups and medium duty trucks, the C3500HD. The C3500HD was only offered as a commercial chassis cab. The C3500HD came with regular cab as the only cab option until 1996, when the crew cab was also offered, it is not clear if the crew cab could only be ordered for fleets only, or if all consumers could order it as well. The extended cab was never offered on the C3500HD. All cabs came standard with upper marker/clearance lights. All but the most deluxe cab options were offered in the C3500HD, as well as all paint colors.

Engine offerings for the C3500HD included the 5.7L (until 1995, when it was dropped for the 96 model year) the 7.4L, and the 6.5L turbo diesel (the 6.2L diesel was never offered for the C3500HD, no diesel was offered for 1991, 1992 brought the 6.5L turbo diesel. The L65 code 6.5L turbo diesel was the only diesel offered in this truck). Transmission offerings were the 4L80E 4spd OD automatic, and the NV4500 5spd OD manual, these were the only two transmissions ever offered for the C3500HD. The common drive axle used on the C3500HD was the Dana 80, a full floating axle with an 11 inch ring gear. There have also been reports of Corporate 14 Bolt (a full floating axle with 10.5 inch ring gear) axles with upgraded axle tubes and hubs being installed. The front axle was a solid I-beam drop axle, similar to the axles of medium and heavy duty trucks. The GVWR of these trucks was 15,000 pounds. Both axles were suspended by leaf springs, and both axles had disc brakes. The wheelbases available were: 135.5", 159.5", and 183.5". The frames on these trucks were similar in design to the C3500 cab and chassis, but were heavily upgraded. the front and middle sections of the frame were hydroformed for strength and tight wheel cut, while from the back of the cab to the end of the truck, the frame was two parallel channels spaced at 34" for easy upfit.

While all other C/K pickup models were dropped by 2000, the C3500HD was produced until 2002 due to demand. In the brochures it is referred to as Sierra Classic/Silverado Classic. the only notable change was the replacement of the 7.4L Vortec Big Block with the 8.1L Vortec Big Block. otherwise, the 6.5L diesel was the only other engine, and the 4L80E and NV4500 were the transmission choices. 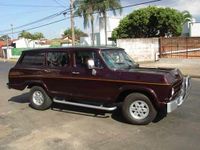 A variant of the C/K family was introduced in Brazil during the 1960s. These used the instrument cluster from the 1960-66 US Chevrolet C/K series although the exterior sheet metal layout is exclusive to Brazil. The models built included a light truck, named C-10, and a SUV named Veraneio (initially known simply as Chevrolet C-14/16), introduced in 1964. They were initially powered with a Chevrolet inline six based on the pre-1962 "Stovebolt" engines. In later years a four-cylinder diesel (Perkins Q20B) was also offered labeled as D-10 (light truck only). An alcohol-powered version of the pickup was offered beginning in the 1980s, dubbed the A-10.

After 1985, a redesigned pickup similar to the U.S. C/K series (1973-87 vintage) was introduced as the C-20, powered with the GM inline six of the U.S. Chevy II/Nova. Diesel and alcohol versions were also sold, labeled as D-20 and A-20 respectively (later models of the D-20 replaced the Perkins Q20B with a Maxion S4). The original version of the Veraneio was kept in production until 1988 (model year 1989), but it was eventually replaced with an updated version based on the C-20 family.