The Chevrolet El Camino (Spanish translation: "The Road") was a coupe utility vehicle / muscle car built by Chevrolet in the United States from 1959 to 1960, with production resuming in 1964 and continuing through 1987. Produced in response to the success of the rival Ford Ranchero, it was based on corresponding Chevrolet car lines, though in North America, the vehicle is classified as a truck and titled as such. During 1978 through 1987, the El Camino was sold under four main models: The Super Sport, The Royal Knight, The Conquista, and the regular El Camino. It also had a twin called the GMC Sprint and later the GMC Caballero from 1978-1987. In Mexico, it was sometimes sold as the Chevrolet Conquistador.

The first El Camino was produced for the 1959 model year (two years after the Ford Ranchero) and, like the Ranchero, was based on an existing and easily modified platform, namely the new-for-1959 Brookwood two-door station wagon and corresponding sedan delivery variant; unlike those more pedestrian versions, the El Camino was available with any trim level and drivetrain option corresponding to the car line, including that of the Chevrolet Impala. This was also the first year of the flamboyant "batwing" full-sized Chevrolet which sold in fewer numbers than more conservatively styled Fords. So too did the El Camino suffer in comparison to the Ranchero with 22,246 built the first year. The similar but less flamboyant 1960 model sold even worse at 14,163 units total at which point General Motors decided to discontinue the model. In total, 36,409 first generation El Caminos were produced.

Four years later, with the Ranchero still selling well, Chevrolet reincarnated the El Camino, based on the then-new Chevrolet Chevelle. That 1964 model was basically identical to the Chevelle forward of the B-pillars, but Chevrolet considered the vehicle a practical, utility model and the Chevelle's most powerful engines were not available. Initial engine offerings included six-cylinder engines of 194 and 230 cubic inches with horsepower ratings of 120 and 155, respectively. The standard V8 was a 283 cubic-inch Chevy small block with two-barrel carburetor and 195 horsepower (145 kW) with optional engines including a 220-horsepower 283 with four-barrel carburetor and dual exhausts. Added to the El Camino's option list during the course of the 1964 model year were two versions of the 327 cubic-inch small block V8 rated at 250 and 300 horsepower (220 kW) - the latter featuring a higher compression ratio of 10.5 to 1, larger four-barrel carburetor and dual exhausts. 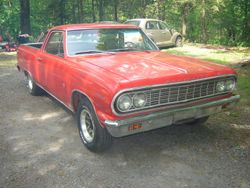 1966 brought added a 396 cu in (6.5 L) V8 engine to the lineup rated from 325 to 375 hp (280 kW). The 1965 327 would run low 15s in the 1/4 mile (at some 90 mph), while 1966 to 1969 models were easily into the mid- to upper-14s. New front end sheetmetal similar to Chevelles highlighted the '66 El Camino and a new instrument panel with horizontal sweep speedometer was featured. Inside, the standard version featured a bench seat interior and rubber floor mat from the lower-line Chevelle 300 series while the Custom used a more upscale interior from the Chevelle Malibu with plusher cloth-and-vinyl or all-vinyl bench seats and deep twist carpeting, or optional Strato bucket seats with console.

The El Camino followed the Chevelle's styling update for 1967, with a new grille, front bumper, and trim. Air shocks were introduced, allowing the driver to compensate for a load. The year 1967 also brought options of disc brakes, Turbo 400 3 speed transmission and the collapsable steering column for the first time. It was the pinnacle year for the 2nd generation El Camino. 2,565 El Camino Customs came with the 396 big block. That option came with the Powerglide, Turbo-Hydro 400 automatic, manual 3 speed or two choices of 4 speed manual Muncie transmissions. The 396 four speed equipped El Caminos were the most rare with less than 500 units sold. Other engines included the standard 230 Turbo-Thrift Six (140 horsepower) and 283 Turbo-Fire V8 (195 horsepower) or optional 327 Turbo-Fire V8s (275 and 325 horsepower).

The 1971 model saw reduced power and performance, along with the rest of Chevrolet's line, as lower-octane unleaded fuel was mandated, and emissions controls began to be felt. Single headlights replaced double for 1971, and the grille now came to a point. Little changed but still lower power outputs for 1972. Engine offerings for 1971-72 included the 250-6, small block V8s of 307 and 350 cubic inches; and big block V8s of 402 and 454 cubic-inch displacements. Horsepower ratings of those engines for 1971 ranged from 145 for the six to 365 for the 454 - all in gross figures. For 1972, horsepower measurements were switched to the "net" figures as installed in a vehicle with all accessories and emission controlles hooked up - this change brought the horsepower ratings for 1972 down to a range from 110 horsepower (82 kW) for the six to 270 for the 454 V8.

A rebadged El Camino called the GMC Sprint debuted in 1971. It shared the same engine/transmission offerings as its Chevy counterpart.

The El Caminos of this period shared exterior and interior trims with the Chevelle Malibu including cloth and vinyl or all-vinyl bench seats and deep twist carpeting. All-vinyl Strato bucket seats and center console were optional.

For 1973, the El Camino was restyled again, matching changes to the Chevelle. It was the largest generation of El Camino, but thanks to lighter construction, it weighed less than the previous generation. A front-end restyle with quad stacked headlights was done in 1976, but otherwise it was the same truck until 1978.

Engine offerings during this period included a 250 cubic-inch inline six and a variety of V8s including the 305, 350 and 400 cubic-inch versions of the Chevy small-block V8, and the 454 Turbo-Jet big block V8 which was discontinued after 1975. Catalytic converters were added to all engines beginning with the 1975 model.

The El Camino was one of the few Chevrolet models to retain an "SS" or Super Sport version through this period as the Chevelle SS was dropped after 1973 and the Nova SS after 1976. The "SS" versions of the Impala, Monte Carlo and Camaro had already been dropped prior to that time.

There were two different trim levels of El Caminos during this period. The base model shared interior and exterior appointments with the Chevelle Malibu while the El Camino Classic (introduced for 1974) shared its trim with the more upscale Chevelle Malibu Classic including notchback bench seat with folding armrest in either cloth or vinyl trim, upgraded door panels and woodgrained instrument panel trim. Offered as an option were the swiveling Strato bucket seats also available in Chevelle Malibus and Lagunas, along with a center console. The "SS" was an option package rather than a distinct model.

In 1974, Chevrolet's sister division, Pontiac, reportedly took an El Camino body and grafted the urethane-nose front end from its Grand Am series and added the GA's instrument panel and Strato bucket seats with recliners and adjustable lumbar support along with Pontiac's Rally II wheels as a styling exercise for a possible Pontiac version of the El Camino. However, that concept never reached production as GMC was offering its own version of the El Camino called the Sprint and many (if not most) Pontiac dealers also sold GMC trucks through dualled dealerships.

A new, smaller El Camino was unveiled in 1978, with more sharp-edged styling and a slightly (one-inch) longer 117-inch (3,000 mm) wheelbase. It included a single headlight design, until a later revision in 1982 that had a four headlight design. The El Camino now shared components with the Chevrolet Malibu (The Chevelle name had been dropped) and Chevrolet Monte Carlo. V6 engines (based on the Buick or Chevrolet 90-degree V6) were available for the first time, and from 1982 through 1984, Oldsmobile-sourced diesel engines. Most common engine found in El Caminos of this era was Chevy's 305 cubic-inch small block V8 rated at 150 or 165 horsepower (123 kW).

The 1984-87 El Camino SS shared the more aerodynamic front nose with the concurrent Monte Carlo SS, but did not get the Monte's higher-output 180-horsepower 305 V8.

After 1984, GM shifted El Camino production to Mexico for three more years. Production ceased after the 1987 model year, as sales of the Chevrolet S-10 true pickup truck were outselling its passenger car counterpart.

Many El Caminos are still used as daily drivers, and some are used in various racing venues. The 1980s version is the most common of any of that generation of body styles, though the late 60s command the highest prices and inspire the most replicas from Hot Wheels, Matchbox and Johnny Lightning which have produced few Ford Rancheros[citation needed]. The Discovery Channel program Monster Garage once turned an El Camino into a Figure-8 racer (dubbed the "Hell-Camino"). The drift team Bubba Drift uses a 1986 El Camino as the only drifting truck. It is unusual in that it uses an automatic transmission instead of a manual transmission.

On a production note, it has been constantly rumored for years now that GM may bring back the El Camino. During the 1995 model year, GM had a concept El Camino based on the full-size Caprice station wagon using the grille of a 1994-96 Impala SS; this concept was destined for production but terminated due to GM's profitable SUV sales. GM already has a vehicle ready in Australia in the form of the Holden Ute, save for some minor changes necessary to make it available in the U.S. This may have been backtracked within the past couple of years, however, as the Subaru Baja, the only "pickup car" recently available in the US, didn't sell well at all and was dropped after the 2006 model year. In addition, the Pontiac GTO (which Holden built and exported for Pontiac and was loosely related to the Holden Ute) didn't sell well either and was only programmed for three years ending in 2006 due to Holden upgrading the platform it was based on. A Chevrolet badged version, known as the Lumina Ute, is sold in South Africa. It has been recently rumored that the Holden Ute will be brought to the States first as a concept and then as the G8ST. After the debut of the Pontiac G8 Concept truck, GM had strongly considered putting it into production. However, alas, this was never to be, and due to the financial struggle of 2008 for GM, they axed the plans in early 2009.