The Chevrolet One-Fifty, or 150 was the economy/fleet model of the Chevrolet car from 1953-1957. It took its name by shortening the production series number (1500) by one digit in order to capitalize on the numerical auto name trend of the 1950s. The numerical designation '"150"' was also sporadically used in company literature. It replaced the Styleline Special model available in previous years. This model was dropped following the 1957 model year being replaced by the Delray. 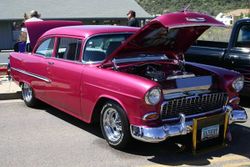 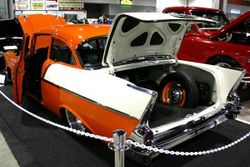 The One-Fifty was mainly conceived as a fleet model and little effort was spent marketing it to the average car buyer of the day although sales weren't limited to fleets. It was most popular with police, state governments, small businesses, economy-minded consumers and hot rodders. Chevrolet sold substantially fewer One-Fifties than Two-Tens or Bel-Airs in every year of its life.

True to Cheverolet's vision, the 150 was no-frills basic transportation. It had limited options, stark trim, solid colors, plain heavy duty upholstery and rubberized flooring. Small things like ashtrays, cigarette lighters and even mirrors were extra cost options. Compared to the mid-level Two-Ten or premium Bel-Air models, the One-Fifty was stark and bland. However, the model became a little more stylish in the last years of existence with previous year's Bel-Air stainless steel side trim and an improved interior due to more standard equipment being included in all Chevrolets.

Body style choices were also limited to sedans, wagons and (until '55) the club coupe. The only body styles specific to the One-Fifty were decidedly fleet oriented: the sedan delivery (a 2 door wagon without rear windows and the rear seat removed) and the business sedan (A 2 door sedan with immobile rear windows and back seat removed). Powertrain choices were limited to manual transmissions and low output engines until 1954. In 1957, a full race ready version was also available commonly known as the "Black Widow" for its black and white paint color. It was equipped with 4 wheel heavy duty brakes, 6-lug wheels and dual shocks.

In general, One-Fifties are less valuable than the sibling Two-Ten and Bel-Air models on the collectors' market but the rare surviving sedan delivery or Utility Sedan (particularly the 1957 model when equipped with a fuel-injected engine, although these all are latter-day modifications) can command premium prices. V8 One-Fifties are popular with hot rod enthusiasts due to lower curb weight and lower prices.

First year for the One-Fifty as well as the Two-Ten. These model years were essentially the same except that the business coupe was renamed the Utility Sedan for '54.

Three engines were used in the '53-'54 model years although not all were available at the same time. All One-Fifties in 1953 used a 3 speed Synchromesh manual transmission. Starting in 1954, Powerglide automatic transmission was available on this series.

The '55 model year marked the introduction of a new chassis and the debut of Chevrolet's legendary small block V8. The One-Fifty buyer was free to chose any powertrain option available. The business sedan was renamed the utility sedan this year.

Engine choices remained the same except for higher hp ratings. The 265³ V8 was available in three different versions. The I6 had a new unified build regardless of transmission type.

New for '57 was the 283 in³ small-block V8. Even the fuel injected version was theoretically available to the One-Fifty buyer. The One-Fifty also had side trim in this year, similar to the 1955's Bel-Air trim in fact.