The 3600 LY7 (and derivative LP1) are members of General Motors' new High Feature (or HFV6) engine family of modern DOHC V6s. This new family of engines was introduced in 2004 with the Cadillac CTS. Holden sells the HFV6 under the name Alloytec. The High Feature moniker on the Holden produced engine is reserved for the twin cam pasing High output version. The block was designed to be expandable from 2.8 L to 4.0 L.

It is a 60° 24-valve design with aluminum block and heads and Sequential Electronic Fuel Injection. Most versions feature continuously-variable cam phasing on both intake and exhaust valves and electronic throttle control. Other features include piston oil-jet capability, forged and fillet rolled crankshaft, forged connecting rods, a variable intake manifold, twin knock control sensors and coil-on-plug ignition. It was developed by the same international team responsible for the Ecotec, including the Opel engineers responsible for the 54° V6, with involvement with design and development engineering from Ricardo, Inc.

The HFV6 was first designed, tested and produced in a joint team by Cadillac and Holden. A majority of design into the new alloy construction, transmission pairing and first use in production were all undertaken in Detroit (and manufactured in St Catherines). Holden had the job of developing smaller engines (Holden 3.2, LP1 and LP9 Turbo) as well as their own Holden HFV6 (called the Alloytec V6) for local models.

Cadillac and Holden both tested variations of these engines in US and Australia.

North America and Australia remain the only two places that manufacture the HFV6.

Alfa Romeo uses the High Feature engine design, though with many modifications, as the JTS V6. The Alfa unit features lean-burn technology as on many other engines from the company. It displaces 3.2 L (3195 cc) and has an output of 256 hp (191 kW; 260 PS) at 6200 rpm and 237 ft·lbf (321 N·m) torque, with gasoline direct injection allowing a high compression ratio of 11.25:1. The engine is also equipped with cam-phasing on both inlet and exhaust side, thus the name "TwinPhaser".

Alfa Romeo only acquires the core designs and productions of the HFV6. It is then taken to their factory and modified for their performance, fuel economy and soundtrack. 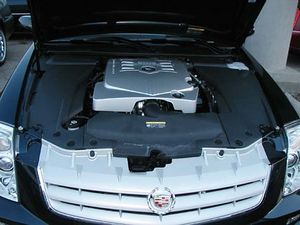 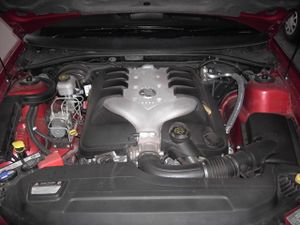 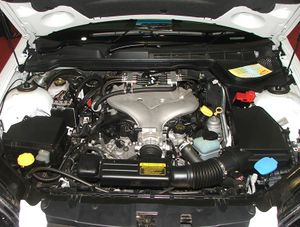 This engine is produced in North America and Australia. 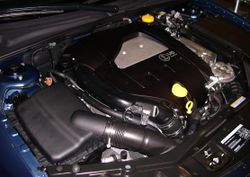 On March 21, 2007 it was reported by AutoWeek that GM is planning to develop a 60-degree V12 based on this engine family to power the top version of Cadillac's upcoming flagship sedan. This engine would essentially consist of two 3.6 L High Feature V6s attached end-to-end on a single crankshaft, and would feature such high-end technologies as direct injection and cylinder deactivation. If so, the engine would displace 7.2 liters, and produce approximately 600 hp (447 kW) and 540 lb·ft (732 N·m) of torque. Development of the engine was reportedly being conducted in Australia by Holden. [11]

In August, 2008, GM announced that development of the V12 had been canceled. The CAFE standards are most likely to blame. [12]