The Opel Senator was a large motor car, two generations of which were sold in Europe by the German General Motors subsidiary, Opel, from 1978 until 1994. A saloon, its first incarnation was also available with a fastback coupé body as the Opel Monza and Vauxhall Royale Coupe.

Through the international divisions of General Motors, it was also known in various markets as the Chevrolet Senator, Vauxhall Royale and Vauxhall Senator.

The original Senator shared its platform with the smaller Opel Rekord, the latter being lengthened to make the Senator.

The later car, from 1987, shared its base with the Opel Omega, which was again lengthened to produce the Senator. 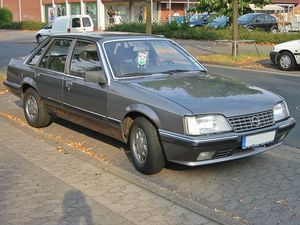 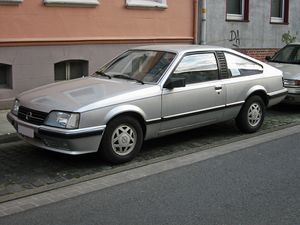 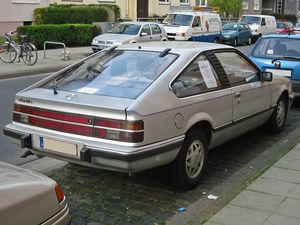 The Senator A (the "A" being used for differentiation here, but not a marketed name) was a six-light, lengthened version of the Opel Rekord E, complemented by a three-door fastback coupé version on the same platform called the Opel Monza, which was planned as a successor for the Opel Commodore coupé.

The Senator A and Monza were initially sold in the United Kingdom as the Vauxhall Royale (and Vauxhall Royale Coupé), because the Opel marque was not so well established, but they were also under their Opel names. The vehicle was also available in South Africa as the Chevrolet Senator until 1982, when it was re-badged as an Opel.

The straight 6-cylinder engines where all of the CIH (camshaft in head) type and were based on an existing straight-4 design from the preceding Commodore.

The original Senator and Monza were face-lifted in 1982/3. In the UK, the Senator "A2" (as it is sometimes referred to) initially sold only as an Opel, before being re-badged for the UK (as a Vauxhall) in 1984. The A2 Monza was only sold as an Opel.

The facelifted car looked similar to its predecessor, with relatively minor changes: headlights increased in size, and chrome parts were changed to a matt black or colour-coded finish.

Interiors were improved, and engines changed. Now, straight-4 CIH 2.0E and 2.2E engines from the Rekord E2 were available. The 2.5E was given a new Bosch fuel injection system. The 2.8S was taken out of production, and the 3.0E and a new 3.0H engines were at the top of the range. The 3.0E received upgraded Bosch fuel injection. 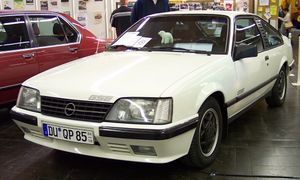 The last incarnation of the Monza was the GSE edition; basically the A2 car, but a high-specification model which had Recaro sports seats, digital LCD instruments, and an enhanced all-black interior. It also featured a large rear spoiler on the boot.

By the time the Senator was updated to the new Senator B, and the Monza cancelled, 47,008 Monzas had been built. There was no direct Monza replacement, although the idea of a large Opel/Vauxhall sporting car was also seen in the Lotus Carlton / Lotus Omega saloon. Opel's next coupé was the slightly smaller Opel Calibra.

In the UK, a four-wheel drive conversion was available, engineered by Ferguson, who had previously provided similar modifications for the Jensen FF. These were used by the British armed forces in Germany under the Brixmis (British Commanders'-in-Chief Mission to the Soviet Forces in Germany) operations for the collection of technical intelligence.

Other uses of the Monza name

This Monza should not be confused with the South African Opel Monza, which was a saloon version of the smaller Opel Kadett. To complicate things further, there also was a Chevrolet Monza in Brazil, which was a version of the 1981 German Opel Ascona but with a three-door fastback body not available anywhere else. There was also an unrelated Chevrolet Monza in the United States. 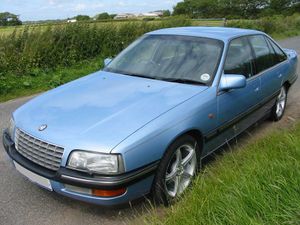 A new model, the Senator B (marketed without the "B" suffix), arrived in 1987, a long-wheelbase version of the Opel Omega (which was the Vauxhall Carlton in the UK). There was no Monza equivalent. This model, and the Omega, formed the basis of the Holden VN Commodore in Australia, which used its own stretched and widened platform.

There were various versions of the Senator B: 12-valve 2.5 L and 3.0 L sized engines were released in 1987 along with a luxury "CD" model with the 3.0 L engine. The CD version boasted adjustable suspension, air conditioning, heated seats, trip computer and cruise control. The cars were available with either 5-speed manual or 4-speed automatic gearboxes. Leather seats were also available as an extra-cost option.

A 24-valve 3.0 L was introduced in 1989, generating 204 bhp (compared with 177 bhp (132 kW; 179 PS) for the older 12-valve version). This model was very popular with the police force in the UK, with several cars being supplied to upgraded police specification. The main feature of the new engine was a "Dual Ram" system, increasing torque at low engine speeds by means of a redirected air flow system engaged at 4,000 rpm.

Only 26,000 units were sold in the UK during the lifespan of the Senator B.

When the second-generation Omega was released in 1994, Opel considered that it was sufficiently represented in the upper end of the market by the top-specification Omega Elite. Consequently, the Senator was cancelled after 1994 and not directly replaced.

A Vauxhall Senator provided the seats used on the Top Gear stage until the warehouse with the show's props caught fire in August 2007.